I've been curious for a while how well the ventilation at the BIDA contra dance works. This is actually something that we can measure reasonably well by looking at CO2 levels: outside air has about 400 parts-per-million (ppm), while your exhalation is about 40,000ppm. By measuring the concentration of CO2 in the air inside, we can determine how much of the air you're breathing has been through other people first.

I recently got a Temptop M2000, which measures CO2, as well as particle levels (pm2.5 and pm10) and HCHO (formaldehyde). I got it because I'm interested in running some tests on my ceiling fan air filter idea, but now that I have it I want to measure everything. It logs to one minute intervals, and you can export to CSV.

The dance is in the basement of the Cambridge Masonic Hall, and the main room is 66x48 (3200 sqft) with about a 25ft ceiling (80,000 ft3). There are four ceiling fans which we keep on high. We have two large barrel fans, rated for 15,000 CFM on high. We put one blowing in at one end, and one blowing out at the other. In theory that might give us 11 ACH (60 min/hr * (80k ft3 / 15k ft3/min)) but I would expect to see lower performance than that: there are various obstructions, and there is nothing to stop air coming back in around the fan (the opening is not sealed around it).

Here's what I measured, with the monitor in a back corner where I expect the air is most stale: 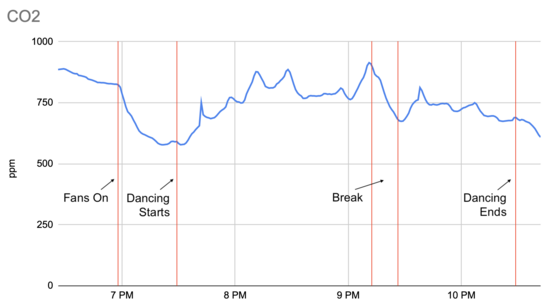 Here's another way to look at this: since atmospheric CO2 is 400ppm and exhalation is 40,000ppm, we can look at how stale the air is on a continuum that runs from "outdoors" to "literally breathing only someone's exhalation". This is (CO2-400)/(40,000-400). Two people having a meeting in a small room with conventional office HVAC gives you ~1000ppm or 1.5% stale, and I'm going to use this as a benchmark for "standard indoor air quality". This dance ranged from 0.5% to 1.5%, so I would say our ventilation was successful at keeping us from going above standard indoor exposure despite the number of people and active movement. 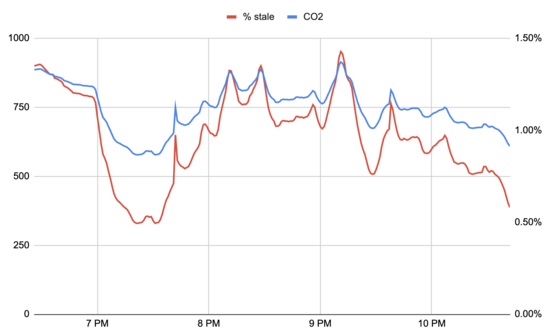 The biggest problem with these measurements is that last night's dance was unusually small: with higher covid rates and us now requiring high-filtration masks we had ~85 people, compared to recent dances with ~190 and pre-pandemic dances with ~130. I definitely want to repeat this a future dance with more typical attendance.

I think this is really cool. I nevertheless expect perhaps that I would be that a normal office meeting would result in less exposure than this dance. I'm not actually sure where my intuition is coming from, but I'm going to say it's due in part to the increased exertion of the dancers causing more potential virus to get mixed into the air, and that this effect is bigger than the increase in CO2 from exertion, if you follow me. The other part would be that perhaps the measurement is too far away from the center of the dance? Hypothetically, if I imagine finding out that the CO2 levels stayed below 1000ppm even in the middle of the dancers, I'd be less skeptical.

I would also expect less exposure in a normal office meeting than at a dance, but I think my expectation is mostly coming from people's faces being farther apart? I think this isn't quite the same as what you're saying: if at a future dance I brought the meter to the middle of the hall and stood there and found that CO2 levels were similar, that doesn't mean that if I were to strap the meter to the my face (and route my own exhalation elsewhere) I would see the same levels?

How do I square that with:

I think "faces being further apart" is basically what I mean in the final two sentences.

Yes, sorry, that was confusing. In thinking about how risky a contradance event is I model it as [general air quality] * [closer to people's faces] * [effect of masking]. I was only trying to talk about the first term, since that's the part that can be controlled by choosing whether to have the dance inside/outside, and how ventilated you can make the space.

Have you (or a reviewer) compared their device with a traceable & calibrated device? I'm curious about how accurate it is.

I don't have anything calibrated; this device supposedly calibrates itself to outside air ppm?

Have you measured "outside air" with it?

That's good evidence to have!