Superintelligence 11: The treacherous turn
Summary
Another view
Notes
2. History
4. Signaling
5. When would the 'conception of deception' take place?
6. Surveillance of the mind
In-depth investigations
How to proceed
50 comments

Welcome. This week we discuss the 11th section in the reading guide: The treacherous turn. This corresponds to Chapter 8.

Reading: “Existential catastrophe…” and “The treacherous turn” from Chapter 8

This is all superficially plausible. It is indeed conceivable that an intelligent system — capable of strategic planning — could take such treacherous turns. And a sufficiently time-indifferent AI could play a “long game” with us, i.e. it could conceal its true intentions and abilities for a very long time. Nevertheless, accepting this has some pretty profound epistemic costs. It seems to suggest that no amount of empirical evidence could ever rule out the possibility of a future AI taking a treacherous turn. In fact, its even worse than that. If we take it seriously, then it is possible that we have already created an existentially threatening AI. It’s just that it is concealing its true intentions and powers from us for the time being.

I don’t quite know what to make of this. Bostrom is a pretty rational, bayesian guy. I tend to think he would say that if all the evidence suggests that our AI is non-threatening (and if there is a lot of that evidence), then we should heavily discount the probability of a treacherous turn. But he doesn’t seem to add that qualification in the chapter. He seems to think the threat of an existential catastrophe from a superintelligent AI is pretty serious. So I’m not sure whether he embraces the epistemic costs I just mentioned or not.

1. Danaher also made a nice diagram of the case for doom, and relationship with the treacherous turn: 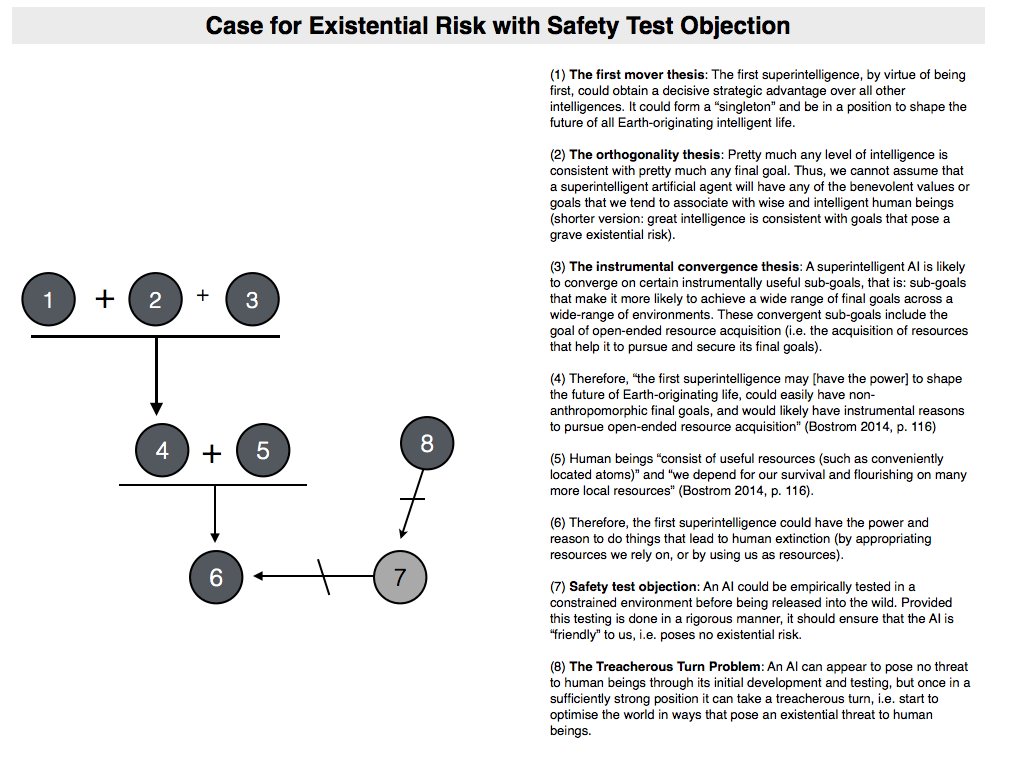 According to Luke Muehlhauser's timeline of AI risk ideas, the treacherous turn idea for AIs has been around at least 1977, when a fictional worm did it:

1977: Self-improving AI could stealthily take over the internet; convergent instrumental goals in AI; the treacherous turn. Though the concept of a self-propagating computer worm was introduced by John Brunner's The Shockwave Rider (1975), Thomas J. Ryan's novel The Adolescence of P-1 (1977) tells the story of an intelligent worm that at first is merely able to learn to hack novel computer systems and use them to propagate itself, but later (1) has novel insights on how to improve its own intelligence, (2) develops convergent instrumental subgoals (see Bostrom 2012) for self-preservation and resource acquisition, and (3) learns the ability to fake its own death so that it can grow its powers in secret and later engage in a "treacherous turn" (see Bostrom forthcoming) against humans.

3. The role of the premises

Bostrom's argument for doom has one premise that says AI could care about almost anything, then another that says regardless of what an AI cares about, it will do basically the same terrible things anyway. (p115) Do these sound a bit strange together to you? Why do we need the first, if final values don't tend to change instrumental goals anyway?

It seems the immediate reason is that an AI with values we like would not have the convergent goal of taking all our stuff and killing us. That is, the values we want an AI to have are some of those rare values that don't lead to destructive instrumental goals. Why is this? Because we (and thus the AI) care about the activites the resources would be grabbed from. If the resources were currently being used for anything we didn't care about, then our values would also suggest grabbing resources, and look similar to all of the other values. The difference that makes our values special here is just that most resources are already being used for them somewhat.

It is hard to tell apart a safe and an unsafe AI, because both would like to look safe. This is a very common problem in human interactions. For instance, it can be nontrivial to tell a genuine lover from a gold digger, a businessman from a conman, and an expert from a crank. All of them want to look like the desirable sort. Particularly similar to the AI case is that of hiring a new employee for a trial period. You will sometimes find that the employee's values are much better aligned during the trial period, and then they undergo a 'treacherous turn' once they have been hired more thoroughly.

'Costly signaling' is a general purpose solution to this problem, which works some of the time. The basic idea is this. Everyone has instrumental reasons to look like the good kind of person, but perhaps their reasons aren't exactly as strong as one other's, or the strength of their desire is harder to act on for one group than the other, so we can construct a set of options that will lead the different types of people to choose differently, even though they know this will set them apart. For instance, while an honest businessman and a conman would both like to say 'I'm an honest businessman', and to behave honestly if you watch them for five minutes, a conman would benefit less from expensive shopfront as an honest businessman, because his reputation is less valuable, so a brand is a signal of being honest.

Similarly, we could perhaps design situations where most harmful AIs would have a reasonable incentive to reveal themselves. This is difficult because so much is at stake, compared to the cost of the signal. But I haven't thought enough about it to rule it out, and I haven't seen anyone else do so either.

5. When would the 'conception of deception' take place?

Below the level of the best humans presumably, since we have already thought of all this.

6. Surveillance of the mind

Bostrom is not optimistic that AI researchers could protect much against risks by watching AI mental processes directly for signs of deception, rapid progress, or undesirable scheming. He says if the AI is smart it will realize this might happen, and hide the offending thoughts.

This seems an open question to me, for several reasons:

As a consequence of 2, it seems better if the 'conception of deception' comes earlier.