A friend observed that fewer people in the effective altruism movement are married than you might expect. I was curious: what are marriage rates like within the EA community? The 2018 EA Survey asked about relationship status, and we can look at how that varies by age: 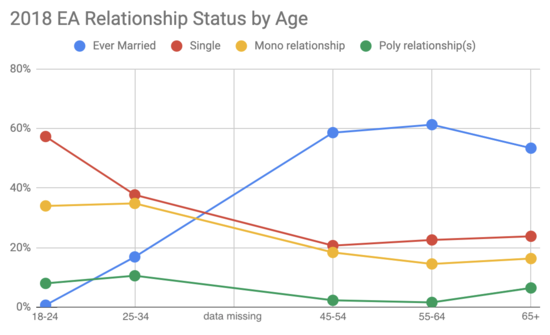 I'm using "ever married" for people who are currently married or have ever been married, including people who are now divorced, widowed, or separated. Since some of these buckets might be pretty small, let's add sample size information: 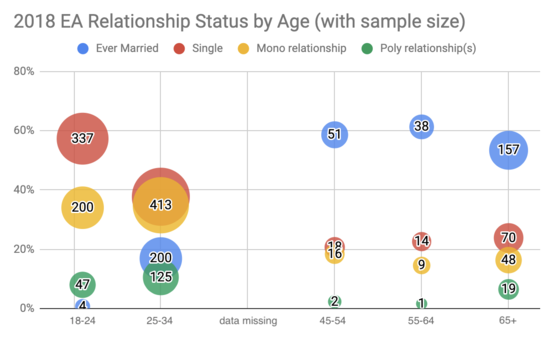 The anonymized survey data doesn't have 35-44 data, and the 65+ group looks suspiciously like it has the 35-44 group lumped in with it. I've filed a bug and if they fix it I'll update the post. For now, probably ignore the 65+ group.

For comparison, here's 2018 ACS data (via) for US marriage rates, on the same scale: 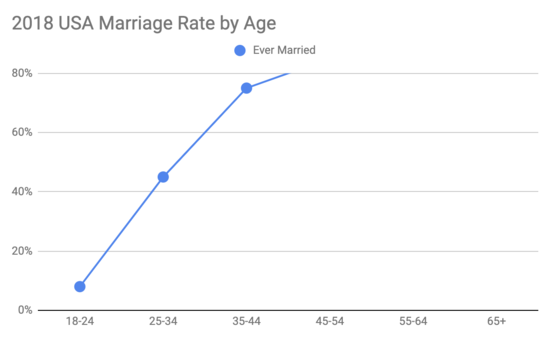 And, at least in the US, people with more education are more likely to be married, after age 28:

Now, EAs are not all American, and even then they're different from Americans as a whole in many ways other than being interested in effective altruism. On the other hand, when I look at what fraction of my (Swarthmore) college friends are married, a group similar to EAs in many ways, it's not far from the graph for the US at large. (And it's off in the positive direction). I see similar numbers by school for people who were 30-34 in 2014.

There does seem to be something real here. Some guesses as to why:

I have two observations from the 2018 EA survey demographic data:

Quick thoughts:
1) I found this interesting, thanks!
2) There's a significant gender imbalance in the Bay Area scene at least.
3) Lots of EAs I know are in Academia; either getting advanced degrees or doing research. Academia presents a lot of challenges to relationships, I would be curious how our statistics compare to those in Academia.
4) Many of my non-EA friends seem to place great value on relationships, my EA friends less so.
5) I would be surprised if poly actually made that big of a difference. My guess would be that it's not actually that popular in EA. I get the impression that poly sounds radical and has been discussed by some of the key people, so seems like a much bigger deal than it really is.

The gender imbalance would only matter if EAs are reluctant to marry outside the group—is that the speculation here?

First, mostly; it is the speculation. Second, in the Bay Area, there's also a gender imbalance outside of EA.

Good to know, I wasn't aware.

Maybe there's some small benefit there, but I'd still be surprised if the gender imbalance on net increased the percentage of marriages.

Another factor that might be in play is, if you're married with children then you have responsibilities towards your family, and that is an incentive against spending resources on altruistic causes.

This is pure speculation, but is there a geographic skew towards CA Bay Area, and if so, how do Bay Area marriage rates compare to the rest of US?

It seems plausible to me that hardcore people have less people in their interest-cluster.

Mayyybe this predicts more marriages per EA in places with a larger local EA community (EtA: otherwise, there might be no good match at all in your city)

I'm surprised also by the relatively low "ever married" rates for the above 45 segments, since marriage rates were higher in the past and those people have had more chances to have gotten married, so barely cresting 60% suggests EA is somehow correlated with folks who don't get married, robust to those people having many opportunities to get married prior to EA coalescing as a movement. I would have expected something closer to 85%.

Dating is a project that can easily suck up a lot of time and attention, and the benefits seem really dubious (I know someone who had their life ruined by a bad divorce).

I would be interested in the opposite question: Why *would* an EA try and find someone to marry? I'm not trying to be snarky, I genuinely want to hear why in case I should change my strategy. The only reason I can think of is if you're a patient longtermist and you think your kids are more likely to be EAs.

While we don't have controlled studies, married people do tend to be happier. Overall, many married people find the companionship of having another person to spend their life with fulfilling, rewarding, comforting, and generally very positive.

There is a risk of an unhappy marriage, but there is also a risk of missing out on what could be a really important relationship.

You could consider talking to people a few decades older than you who seem like the kind of people you might be in a few decades time, and asking whether they're married and how they feel about it?

If anyone wants to do that, I would be really interested in seeing such an analysis but for children, as I see relationship status mostly as a proxy for that, but probably not a very good one. If no one does it, I might do it at some point.

Was number of children ever asked on an EA survey?

I just made a quick search, and it seems like it never was :o

Utilitarians code as defectors to normal people for good reason.