Personal Blog
Misapplied economics and overwrought estimates
The question:
(Short-run) Answers from the rationalist community:
(Long-run) Answers from neoclassical economics:
In other words, while certain market characteristics (increasing-cost industries) would lead us to expect that production will fall by less than consumption in the long-run, it could also fall by an equal amount, or even more.
Short-run versus long-run
Are there broader lessons to learn?
31 comments

I believe that a small piece of rationalist community doctrine is incorrect, and I'd like your help correcting it (or me). Arguing the point by intuition has largely failed, so here I make the case by leaning heavily on the authority of conventional economic wisdom.

How does an industry's total output respond to decreases in a consumer's purchases; does it shrink by a similar amount, a lesser amount, or not at all?

(Short-run) Answers from the rationalist community:

The consensus answer in the few cases I've seen cited in the broader LW community appears to be that production is reduced by an amount that's smaller than the original decrease in consumption.

Fewer people in the market for meat leads to a drop in prices, which causes some other people to buy more meat. The drop in prices does also reduce the amount of meat produced and ultimately consumed, but not by as much as was consumed by people who have left the market.

Compassion, by the Pound:

These answers are all correct in the short-run (ie, when the “supply curve” doesn’t have time to shift). If there is less demand for a product, the price will fall, and some other consumers will consume more because of the better deal. One intuitive justification for this is that when producers don’t have time to fully react to a change in demand, the total amount of production and consumption is somewhat ‘anchored’ to prior expectations of demand, so any change in demand will have less than a 1:1 effect on production.

For example, a chicken producer who begins to have negative profits due to the drop in price isn't going to immediately yank their chickens from the shelves; they will sell what they've already produced, and maybe even finish raising the chickens they've already invested in (if the remaining marginal cost is less than the expected sale price), even if they plan to shut down soon.

In the long-run, however, the chicken producer has time to shrink or shut down the money-losing operation, which reduces the number of chickens on the market (shifts the "supply curve" to the left). The price rises again and the consumers that were only eating chicken because of the sale prices return to other food sources.

As a couple of online economics resources put it:

The long-run market equilibrium is conformed of successive short-run equilibrium points. The supply curve in the long run will be totally elastic as a result of the flexibility derived from the factors of production and the free entry and exit of firms. 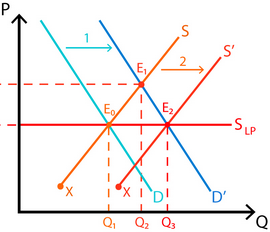 The increase in demand causes the equilibrium price of zucchinis [to] increase... and the equilibrium quantity [to] rise... The higher price and larger quantity is achieved as each existing firm in the industry responds to the demand shock.

However, the higher price leads to above-normal economic profit for existing firms. And with freedom of entry and exit, economic profit attracts kumquat, cucumber, and carrot producers into this zucchini industry. An increase in the number of firms in the zucchini industry then causes the market supply curve to shift. How far this curve shifts and where it intersects the new demand curve... determines if the zucchini market is an increasing-cost, decreasing-cost, [or] constant-cost industry.

Constant-Cost Industry: An industry with a horizontal long-run industry supply curve that results because expansion of the industry causes no change in production cost or resource prices. A constant-cost industry occurs because the entry of new firms, prompted by an increase in demand, does not affect the long-run average cost curve of individual firms, which means the minimum efficient scale of production does not change.

[I left out the similar explanations of the increasing- and decreasing-cost cases from the quote above.]

In other words, while certain market characteristics (increasing-cost industries) would lead us to expect that production will fall by less than consumption in the long-run, it could also fall by an equal amount, or even more.

Economists define the long-run as a scope of time in which producers and consumers have time to react to market dynamics. As such, a change in the market (e.g. reduction in demand) can have one effect in the short-run (reduced price), and a different effect in the long-run (reduced, constant, or increased price). In the real world, there will be many changes to the market in the short-run before the long-run has a chance to react to to any one of them; but we should still expect it to react to the net effect of all of them eventually.

Why do economists even bother measuring short-run dynamics (such as short-run elasticity estimates) on industries if they know that a longer view will render them obsolete? Probably because the demand for such research comes from producers who have to react to the short-run. Producers can't just wait for the long-run to come true; they actively realize it by reacting to short-run changes (otherwise the market would be 'stuck' in the short-run equilibrium).

So if we care about long-run effects, but we don't have any data to know whether the industries and increasing-cost, constant-cost, or decreasing-cost, what prior should we use for our estimates? Basic intuition suggests we should assume an industry is constant-cost in the absence of industry-specific evidence. The rationalist-cited pieces I quoted above are welcome to make an argument that animal industries in particular are increasing-cost, but they haven't done that yet, or even acknowledged that the opposite is also possible.

Are there broader lessons to learn?

Have we really been messing up our cost-effectiveness estimates simply by confusing the short-run and long-run in economics data? If so, why haven't we noticed it before?

I'm not sure. But I wouldn't be surprised if one issue is, in the process of trying to create precise cost-effectiveness-style estimates it's tempting to use data simply because it's there.

How can we identify and prevent this bias in other estimates? Perhaps we should treat quantitative estimates as chains that are no stronger than their weakest link. If you're tempted to build a chain with a particularly weak link, consider if there's a way to build a similar chain without it (possibly gaining robustness at the cost of artificial precision or completeness) or whether chain-logic is even appropriate for the purpose.

For example, perhaps it should have raised flags that ACE's estimates for the above effect on broiler chicken production (which they call "cumulative elasticity factor" or CEF) ranged by more than a factor of 10x, adding almost as much uncertainty to the final calculation for broiler chickens as the 5 other factors combined. (To be fair, the CEF estimates of the other animal products were not as lopsided.)