What is the typical course of COVID-19? What are the variants?

What is the typical course of COVID-19? What are the variants?
Answers
29
Elizabeth
EARLY APPEARANCE OF SYMPTOMS Tl;dr COVID-19 might start with a cough, o...
26
Elizabeth
WHAT PERCENTAGE OF INFECTIONS NEVER DEVELOP SYMPTOMS? Epistemic Status:...
23
Elizabeth
Diamond Princess data. This dataset is particularly useful because eve...
13
Elizabeth
Day by day course of coronavirus, starting from day 1 of symptoms
4
Elizabeth
From Our World In Data based on this paper. It's not clear that t...
4
Elizabeth
First-person account from a woman who believes she and many other peop...
3
Elizabeth
A pre-print out of Germany on a study of 9 patients shows:
-4
Davidmanheim
The CDC has a lot of useful information about much of this: https://ww...
No comments

I've heard a lot about the death rate, hospitalization rate, doubling time, etc, but I don't feel like I know *what happens* when you catch SARS-CoV-2. My questions include, but are not limited to:

I will edit this top-level post with answers as they are filled it.

Tl;dr COVID-19 might start with a cough, or a fever, or both, or occasionally maybe neither. It might start suddenly or slowly. It might remit and then come back worse.

This was hard to figure out. Most academic/medical papers start with the person’s first contact with the medical system, which is too late, so I looked at social media and news reports. These are obviously going to be biased towards people with symptoms severe enough to be interesting, but not so severe as to die. I also restricted myself to test-confirmed cases, which because I was also looking at mostly American sources biases things towards severe cases. And I’m counting on people to represent themselves honestly. So there’s a lot going against this sample.

In total I found 11 cases, plus two notes from doctors doing front line work. You can see my and Eli Tyre’s notes on every case here and the symptom tracking spreadsheet here. Both are messy and no work has been spent making them comprehensible to others.

From this very small and biased sample:

On the other hand, this pre-print found that only 44% of patients had a fever on admission to the hospital, and 88% ever had one. The fevers can be intermittent. Both that paper and the doctor I just linked to report very high occurrence (85%+) of lymphocytopenia (low white blood cell count), but that is not very useful to diagnosing yourself, and it’s not clear when it starts.

Known scientific source Business Insider says that most cases start with fever. They do not mention their source.

You may have heard that 80% of cases are mild. Keep in mind that that paper defined mild to include mild pneumonia, which I would classify as at least moderately severe.

Similarly, the paper reporting 50% of patients appeared at the hospital with digestive symptoms counted “loss of appetite” as a digestive symptom. Only 19% presented with a more definitely gastroenteric complaint like nausea or vomiting.

Tl;dr: Anything from zero to half of coronavirus infections are asymptomatic, but we currently can’t narrow it down much more than that.

One way to estimate the number of asymptomatic cases is to PCR test a bunch of people and see what percentage test negative. There’s three obvious problems with that:

The most representative sample I know of is the Diamond Princess cruise liner, because everyone on board was tested, giving us some kind of reasonable denominator. It’s still not a random sample of the population, because cruise takers skew old-but-healthy-for-their-age, but it’s a start. Of that population, 3,063 tests returned 634 positive results, of which 306 were asymptomatic. But this only solves problem 1, a bit.

This pre-print uses statistical modeling to try to sort those into presymptomatic and true-asymptomatic cases, but has a weird math error I’m trying to get clarity on. I e-mailed the English-speaking author on 3/24 and will update if I hear back, but until then, here’s the problem: the model uses an incubation period of 6.4 to predict that 18% of C19 infections are true-asymptomatic (as opposed to merely pre-symptomatic). But when they let that vary from 5.5 to 9.5 days, they get a range of 20% to to 40%. That only works if percent-asymptomatic is a non-monotonic function of incubation period, and that would be extremely weird..

Even if that model is correct there’s still the problem of unreliable tests. This paper estimates that “almost half or more” of asymptomatic positives among people, tested in China, because they were in close contact with a known case, were false positives and the person never had the virus. Unfortunately the English abstract doesn’t specify how they came to this number, and the original article is in Chinese, so I can’t even attempt to translate this to other populations.

This news article based on “classified Chinese government data” says that ⅓ of people who tested positive asymptomatic, but doesn’t specify whether they were monitored to see if they stayed asymptomatic.

My best hope for better data on this is South Korea, thanks to its aggressive testing and monitoring strategy. Unfortunately I haven’t found any of their results, despite spending 30 minutes looking.

Diamond Princess data. This dataset is particularly useful because everyone on board the ship was tested, meaning asymptomatic infections could be caught. (h/t @habryka for link)

Shows the # of asymptomatic cases by age group. I couldn't determine how long after exposure these people were tested, so this should be treated as an upper bound for percent-asymptomatic, not the average. One interesting thing is that people in their 20s and 30s had a much higher rate of symptoms (80%+) than older or younger people (< 60%).

Day by day course of coronavirus, starting from day 1 of symptoms

Day 1: Patients run a fever. They may also experience fatigue, muscle pain, and a dry cough. A small minority may have had diarrhea or nausea one to two days before.

Day 5: Patients may have difficulty breathing — especially if they are older or have a preexisting health condition.

Day 7: This is how long it takes, on average, before patients are admitted to a hospital, according to the Wuhan University study.

Day 8: At this point, patients with severe cases (15%, according to the Chinese CDC) develop acute respiratory distress syndrome, an illness that occurs when fluid builds up the lungs. ARDS is often fatal.

Day 10: If patients have worsening symptoms, this is the time in the disease's progression when they're most likely to be admitted to the ICU. These patients probably have more abdominal pain and appetite loss than patients with milder cases. Only a small fraction die: The current fatality rate hovers at about 2%.

Day 17: On average, people who recover from the virus are discharged from the hospital after 2 1/2 weeks.

From Our World In Data based on this paper. It's not clear that they studied people until recovery, so some of those mild cases could have gotten more serious later. 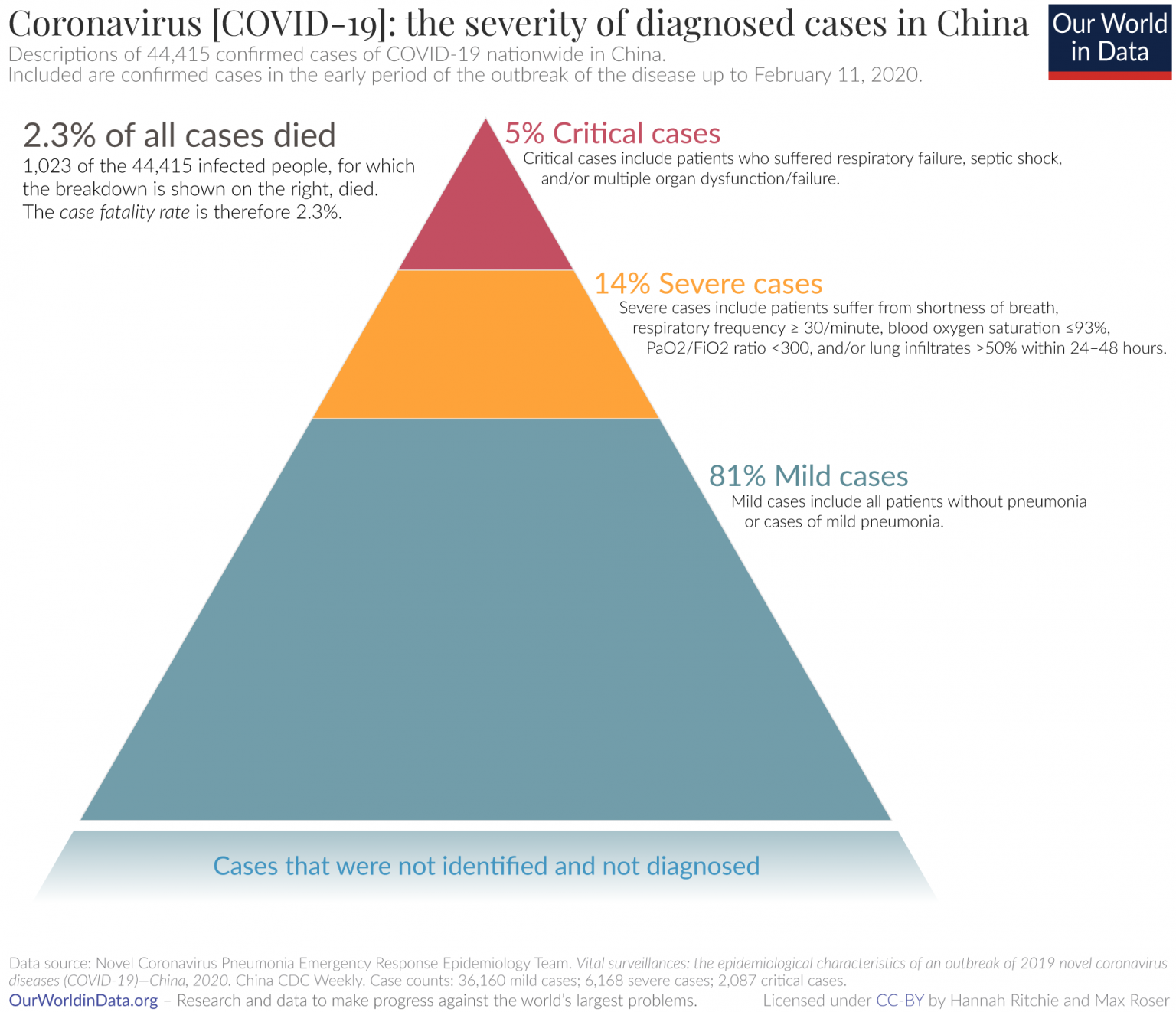 First-person account from a woman who believes she and many other people were infected at a party. She was confirmed positive via the Seattle Flu Study, the other victims were not.

40% of folks were all sick within 3 days of attending the party all with the same/similar symptoms including fever.

Most of my friends who got it were in their late 40s to early 50s. I’m in my mid 30s. For us it was headache, fever (for first 3 days consistently and then on and off after 3 days), severe body aches and joint pain, and severe fatigue. I had a fever that spiked the first night to 103 degrees and eventually came down to 100 and then low grade 99.5. Some folks had diarrhea. I felt nauseous one day. Once the fever is gone some were left with nasal congestion, sore throat. Only a very few of us had a mild itchy cough. Very few had chest tightness or other respiratory symptoms. Total duration of illness was 10-16 days.

A pre-print out of Germany on a study of 9 patients shows:

The CDC has a lot of useful information about much of this: https://www.cdc.gov/coronavirus/2019-ncov/about/index.html

For example, on the clinical course of the disease, it has this: https://www.cdc.gov/coronavirus/2019-ncov/hcp/clinical-guidance-management-patients.html#clinical-course - "Clinical presentation among reported cases of COVID-19 varies in severity from asymptomatic infection to mild illness to severe or fatal illness. Some reports suggest the potential for clinical deterioration during the second week of illness.[2,5] In one report, among patients with confirmed COVID-19 and pneumonia, just over half of patients developed dyspnea a median of 8 days after illness onset (range: 5–13 days). [2] In another report, the mean time from illness onset to hospital admission with pneumonia was 9 days.[1] Acute respiratory distress syndrome (ARDS) developed in 17–29% of hospitalized patients, and secondary infection developed in 10%. [2,4] In one report, the median time from symptom onset to ARDS was 8 days.[3]"

For information about when someone is infectious, https://www.cdc.gov/coronavirus/2019-ncov/hcp/faq.html, it says, "The onset and duration of viral shedding and period of infectiousness for COVID-19 are not yet known. It is possible that SARS-CoV-2 RNA may be detectable in the upper or lower respiratory tract for weeks after illness onset, similar to infection with MERS-CoV and SARS-CoV. However, detection of viral RNA does not necessarily mean that infectious virus is present. Asymptomatic infection with SARS-CoV-2 has been reported, but it is not yet known what role asymptomatic infection plays in transmission. Similarly, the role of pre-symptomatic transmission (infection detection during the incubation period prior to illness onset) is unknown. Existing literature regarding SARS-CoV-2 and other coronaviruses (e.g. MERS-CoV, SARS-CoV) suggest that the incubation period may range from 2–14 days."

For information about how to tell when someone is no longer infectious, see: https://www.cdc.gov/coronavirus/2019-ncov/hcp/disposition-hospitalized-patients.html

They also have a frequently updated list of papers that have the sources for their information: https://www.cdc.gov/coronavirus/2019-ncov/publications.html