A Visualization of Nick Bostrom’s Superintelligence

Through a series of diagrams, this article will walk through key concepts in Nick Bostrom’s Superintelligence. The book is full of heavy content, and though well written, its scope and depth can make it difficult to grasp the concepts and mentally hold them together. The motivation behind making these diagrams is not to repeat an explanation of the content, but rather to present the content in such a way that the connections become clear. Thus, this article is best read and used as a supplement to Superintelligence.

Roadmap: there are two diagrams, both presented with an accompanying description. The two diagrams are combined into one mega-diagram at the end. 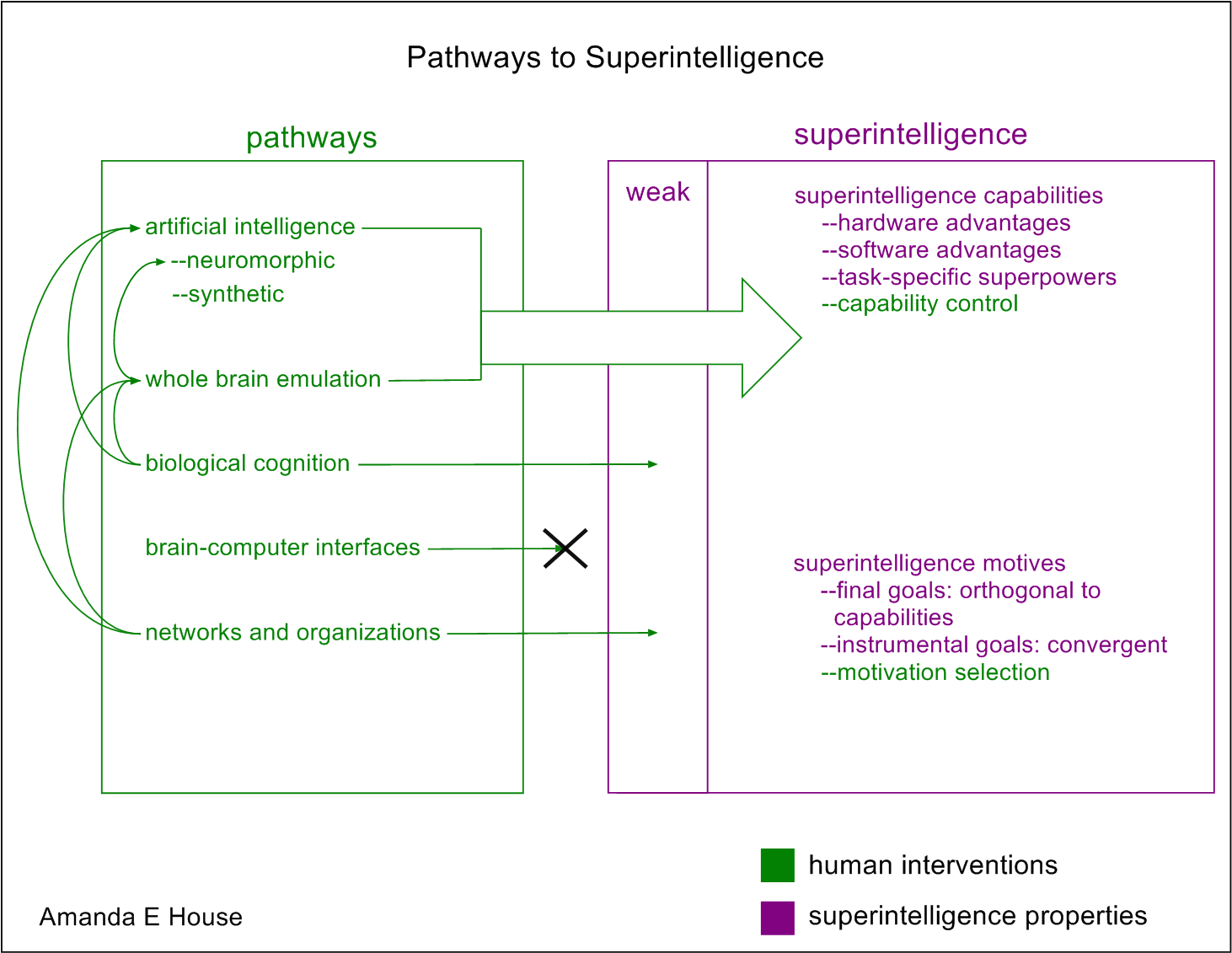 Figure 1 displays the five pathways toward superintelligence that Bostrom describes in chapter 2 and returns to in chapter 14 of the text. According to Bostrom, brain-computer interfaces are unlikely to yield superintelligence. Biological cognition, i.e., the enhancement of human intelligence, may yield a weak form of superintelligence on its own. Additionally, improvements to biological cognition could feed back into driving the progress of artificial intelligence or whole brain emulation. The arrows from networks and organizations likewise indicate technologies feeding back into AI and whole brain emulation development.

In addition to what a superintelligence might do, Bostrom discusses why it would do those things, i.e., what its motives will be. There are two main theses—the orthogonality thesis and the instrumental convergence thesis—both of which are expanded upon in chapter 7. Motivation selection, found in chapter 9, is another method to avoid undesirable outcomes. Motivation selection is the loading of desirable goals and purposes into the superintelligence, which would potentially render capability control unnecessary. As motivation selection is another problem for human programmers, it also appears in green. 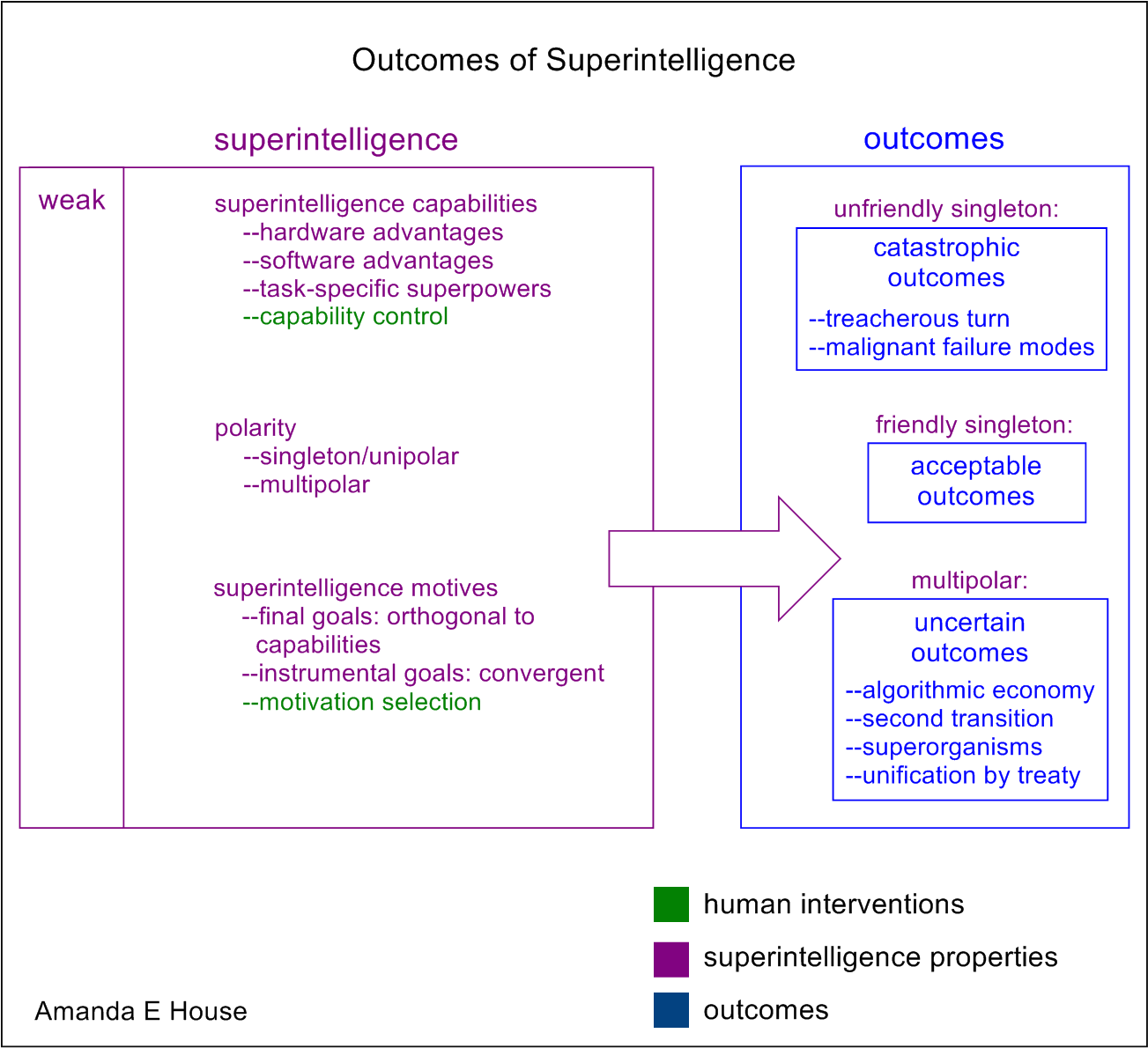 Bostrom describes singletons in the most detail. An unfriendly singleton leads to existential risks, including scenarios which Bostrom describes in chapter 8. In contrast, a friendly superintelligence leads to acceptable outcomes. Acceptable outcomes are not envisioned in as great detail as existential risks; however, chapter 13 discusses how a superintelligence operating under coherent extrapolated volition or one of the morality models would behave. This could be seen as an illustration of what a successful attempt at friendly superintelligence would yield. A multipolar scenario of superintelligence is more difficult to predict; Bostrom puts forth various visions found in chapter 11. The one which receives the most attention is the algorithmic economy, based on Robin Hanson’s ideas. 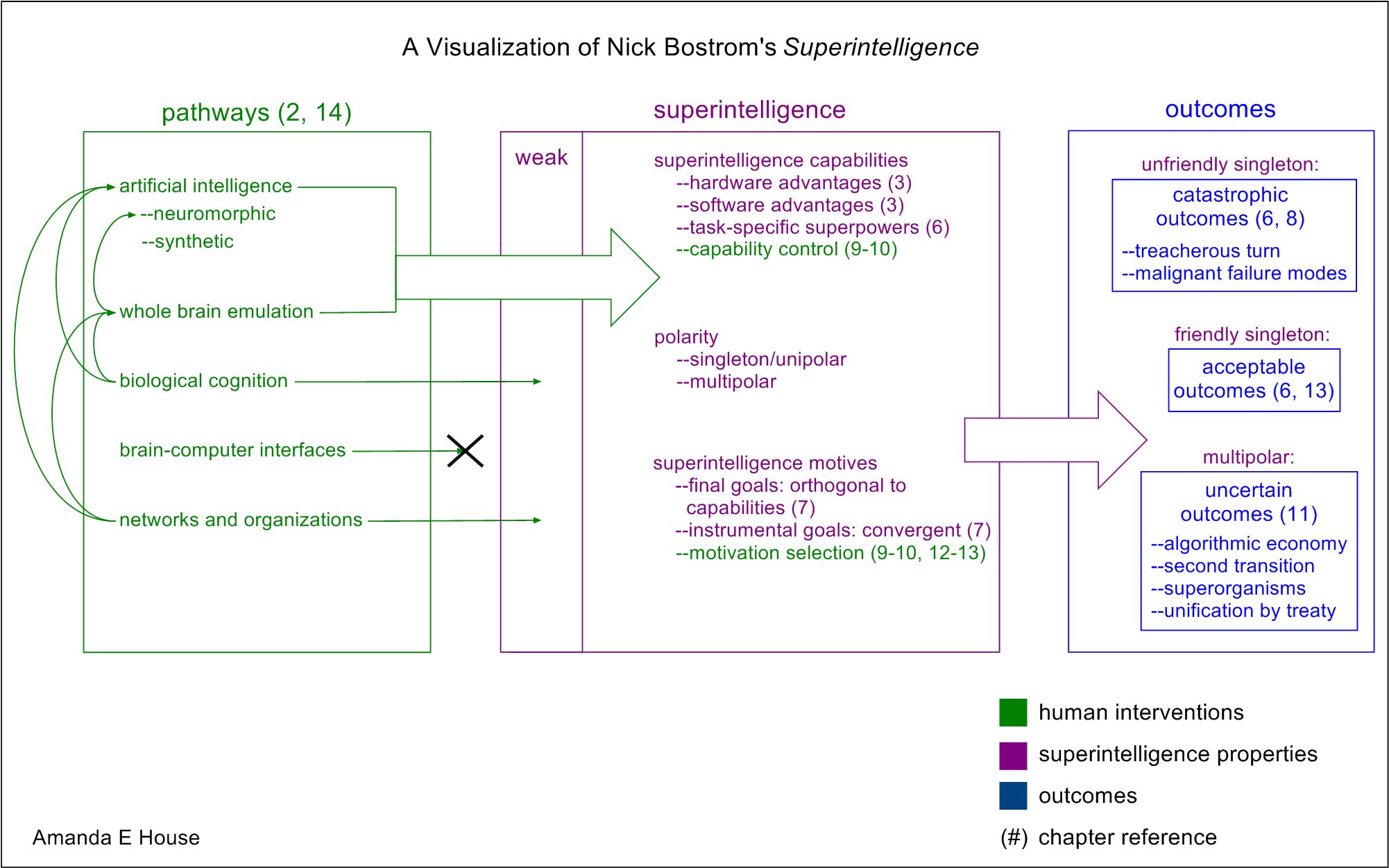 Finally, figures 1 and 2 are put together for the full diagram in Figure 3. As Figure 3 is an overview of the book's contents, it includes chapter numbers for parts of the diagram. This allows Figure 3 to act as a quick reference and guide readers to the right part of Superintelligence for more information.

Thanks to Steven Greidinger for co-creating the first versions of the diagrams, to Robby Bensinger for his insights on the final revisions, to Alex Vermeer for his suggestions on early drafts, and to Luke Muehlhauser for the time to work on this project during an internship at the Machine Intelligence Research Institute.