Every ambulance that goes out represents a massive waste of potential: it doesn't have any passengers! Ambulances need space to transport people on the return trip, and it really says something about humanity that we've gone so many years with that capacity completely idle on the outward journey. It would be one thing if we were talking about vehicles that travel normally across the city—though of course I'd love to see more carpooling—but these are high-speed vehicles! Traffic yields to open a path, they don't have to wait for stoplights, they're the fastest way across the city.

The reason we haven't fixed this already is that it's only recently that smartphones have become widely available. Before, it would have been too hard to connect travelers with first responders going their direction within the narrow window between an alert coming in and a vehicle going out. After, bypassing taxi supply cap regulations was a larger market. But now, the time is ripe: introducing Ambolyft! 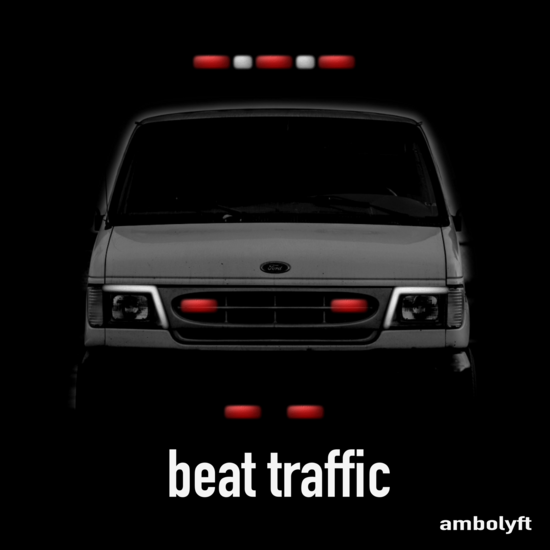 While our initial fleet is currently entirely ambulances, we're expanding to police as well. Great side hustle opportunity! 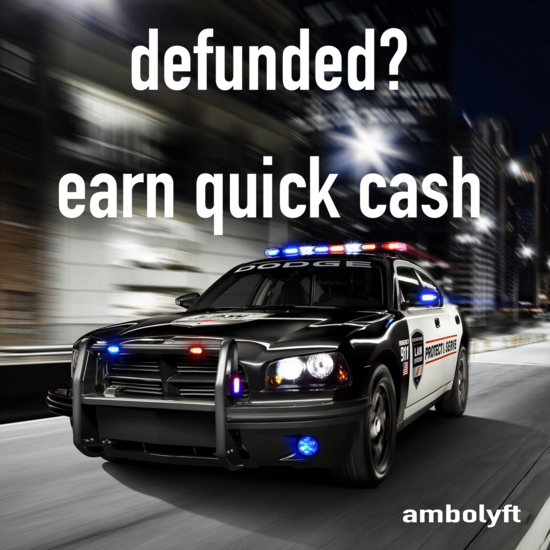 I am sure you could pitch this to a bunch of VC's and end up with both funding and a insane valuation.

Yeah I forgot the market shifted.

I think you're probably joking, but it's also a fun idea to take seriously.

The biggest legal hurdle to this might be insurance. Any transporting ambulance has a lot of very tightly controlled drugs on board -- who would be responsible if an Ambolyft passenger stole some?

Anyways, I'm not convinced that this model (focusing on emergent transport) would represent an actual time savings for passengers. i assume that no delay to the ambulance is morally acceptable; tolerating emergency response delays in the name of profit would of course change this calculus significantly. Professional ambulance crews hang out at the station all day waiting for calls, so a hypothetical passenger would have to be hanging out at the exact station from which the ambulance is dispatched at the time the call arrives. This means the passenger would have to make their way to the station via other transport options, and then wait around for an unknowable duration until a call comes in that's going in their general direction.

However, the lights-and-sirens ambulances aren't the only ambulances on the road. Ambulances and helicopters also do non-emergent transports, moving patients from one facility to another. If a rider lived near a hospital that patients often have to be transported to from out of the area, they could potentially catch a ride out of that area on a now-empty vehicle that had brought a patient in. When a transport toward a facility is initiated, you have the entire travel time to get the ride buyer to the destination facility, or possibly even allow many prospective buyers to bid on seats for the vehicle's return trip.

Riders would probably have to be vetted, possibly background checked, to make sure they seemed unlikely to attempt to steal the drugs or harm the crew of the ambulance, but that might not be an insurmountable hurdle. There might even be a market for this kind of transport, perhaps among medical personnel scheduled for shifts at other facilities, or people who frequently visit a medical center for a short procedure and then need to return to an outlying area.

I think you're probably joking

Yup! But I appreciate the serious consideration regardless

This reminded me about https://www.businessinsider.com/hiring-ambulances-to-beat-moscow-traffic-2013-3 - in Russia one could actually illegally hire a fake ambulance as a taxi:

An ambulance driver once explained why I beat him to the hospital: have you ever taken a ride in the back of a truck?  It's a very bumpy ride.

Explaining kills the joke but I understood the humor here works that the viewpoint is very salient on private goods and very blind to important public goods. This "improvement" would probably be detrimental to the reliability of patient transfer but from the strategically chosen viewpoint the proof doesn't have any missteps (atleast locally).

If one were superserious about time from call to ambulanced arrival you could have ambulances scattered separately across the town so that the mean distance from takeoff to accident scene is low no matter where it happens. The downside of this is upkeeping the first responders in many locations with less synergy with other care professionals. And some function of ambulances can be getting medical knowledge and attention to the scene fast rather than the patient to the hospital fast (it is hard to get a specialist to hop on board if EMTs and doctors are not neighbours). However in this kind of scheme after the alert drive the ambulance probably wants to eventually get back to its "parking spot". This hospital to upkeep station leg would be more usable for secondary uses and would be more decoupled from the alert drive. I would probably keep the principle that healthcare alerts get priority even over civilian task in progress. That is the ambulance can and will kick the taxi passenger out on the spot to the street to go serve patients. This principle would probably make it way less attractive as a taxi replacement.

One could argue that US style arrangement is already too taxi-like. If people opt too hard to use their own cars to avoid getting billed for ambulance that is directly proportional to the costs that can be a downgrade compared to how stably and quickly things would be done if we cared for health only. Another model is to set a low constant fee that is somewhat more than ordinary traffic to deter people not using the service for mere convenience, but minor enough that for actual medical need it doesn't become a use deterrent. 100 vs 1000. But I guess that can already be shadowed by people opting to not treat stuff as they feel they can not afford the actual care. But might be have been used to think about it in a context where society has the will to provide universal assistance to keep people alive (with voices like "Why I should be forced to pay for Xs life?" not having too much popularity).

If one were superserious about time from call to ambulanced arrival you could have ambulances scattered separately across the town so that the mean distance from takeoff to accident scene is low no matter where it happens.

Hatzalah and Magen David Adam in Israel actually works this way. They have volunteer first responders throughout the populace, and whenever a call goes out they'll radio the nearest ones to get to the scene as soon as possible. First responders usually arrive within a matter of minutes - I personally know of at least 3 within a 5 minute walk of me.

Getting an ambulance to the scene for actually transporting the patient takes longer, as these are more centralised.

I enjoyed it, almost want to go for the ubercop idea. A serious alternative way to increase emergency vehicle utilization (by weight, size, cost or similar) is to make them smaller. They're unnecessarily monster sized, in the US anyway. #DefundPoliceSUVs