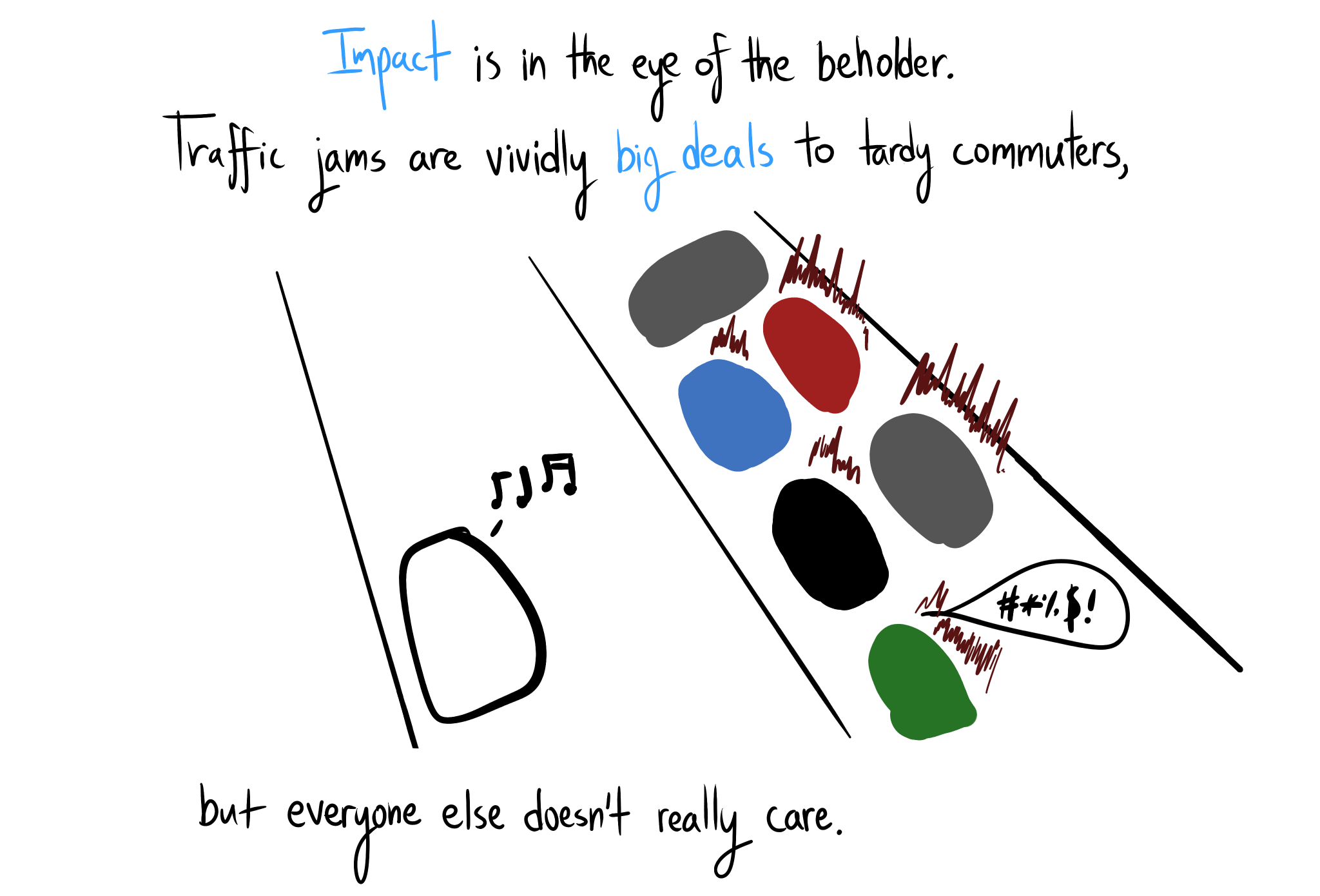 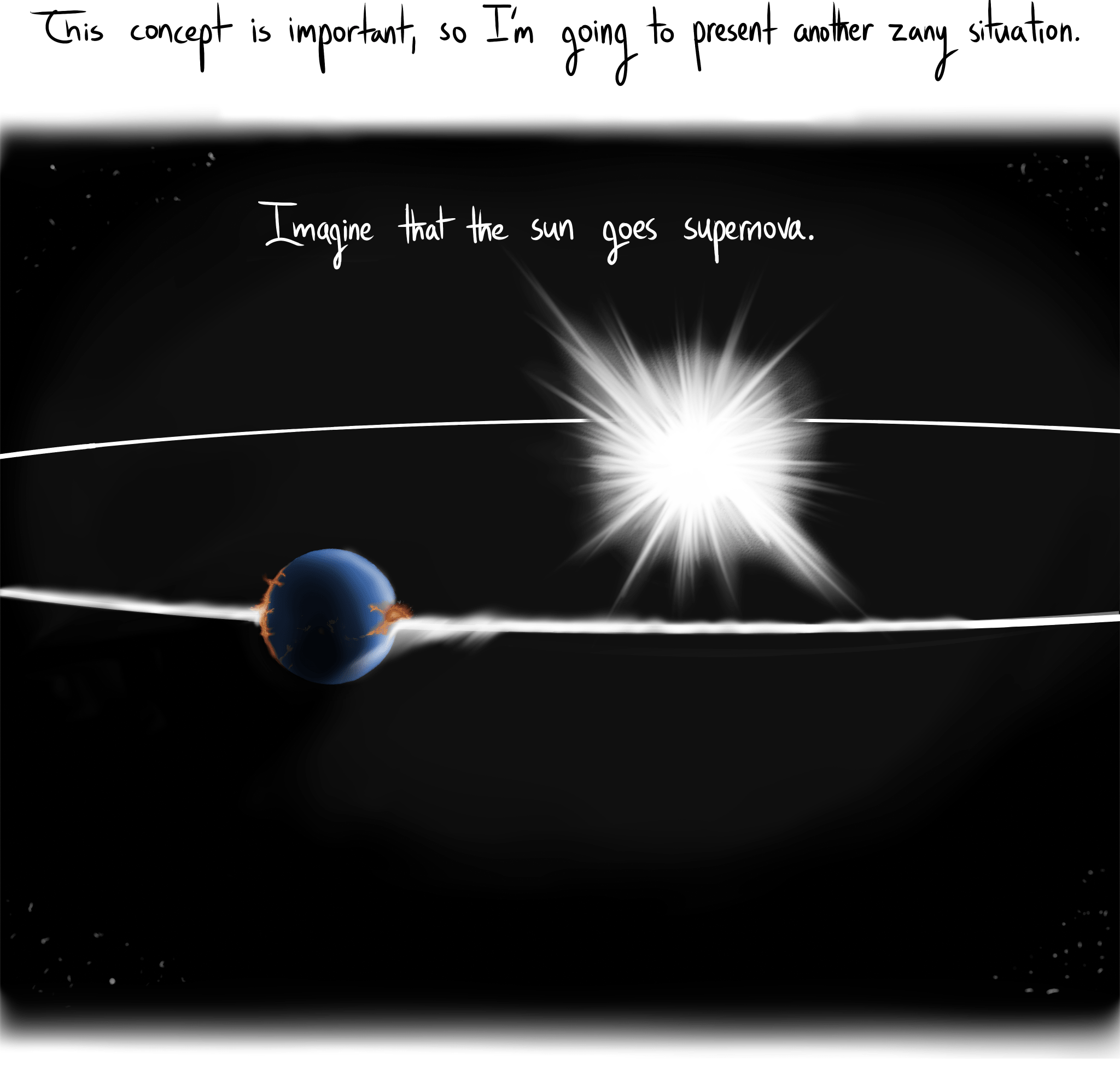 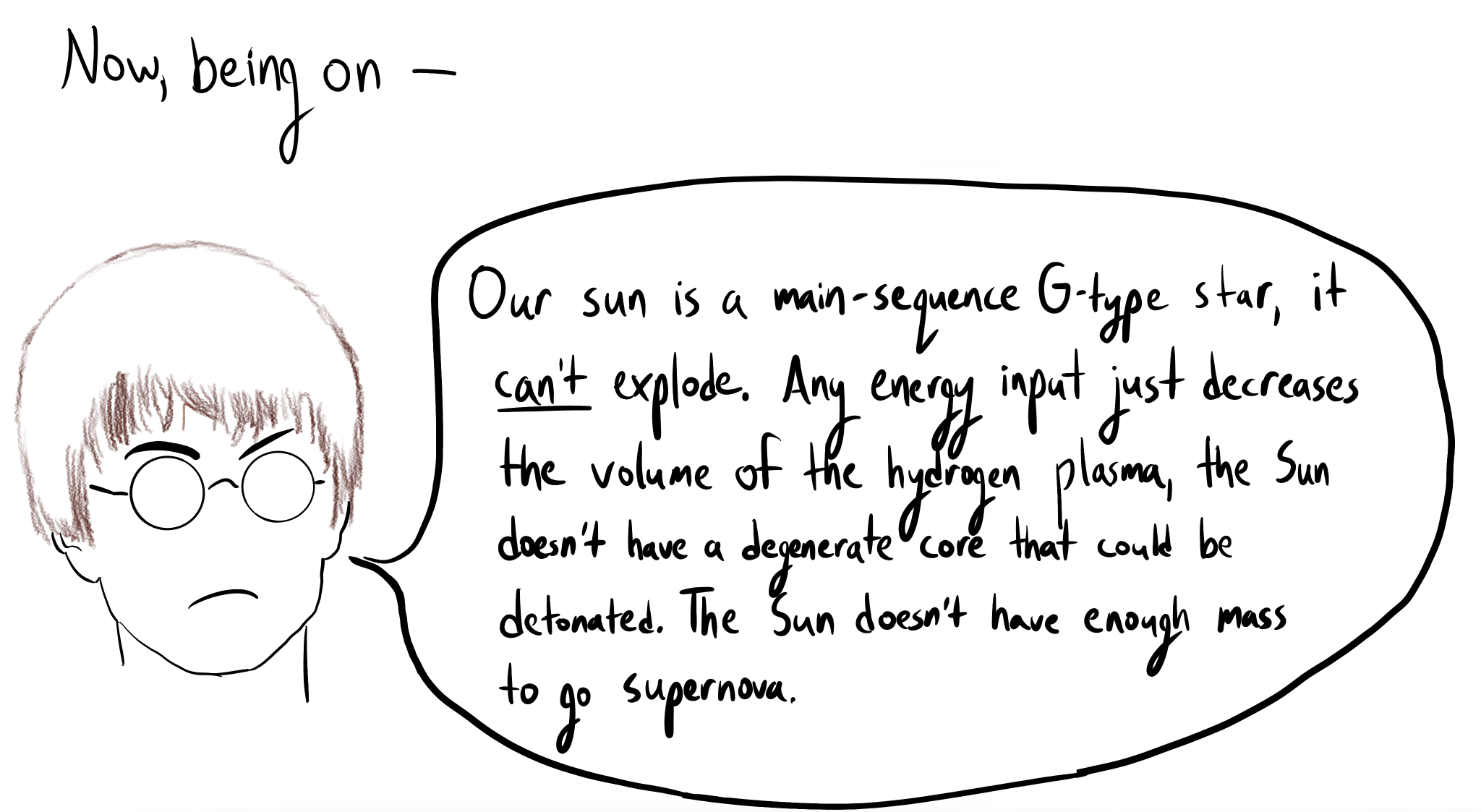 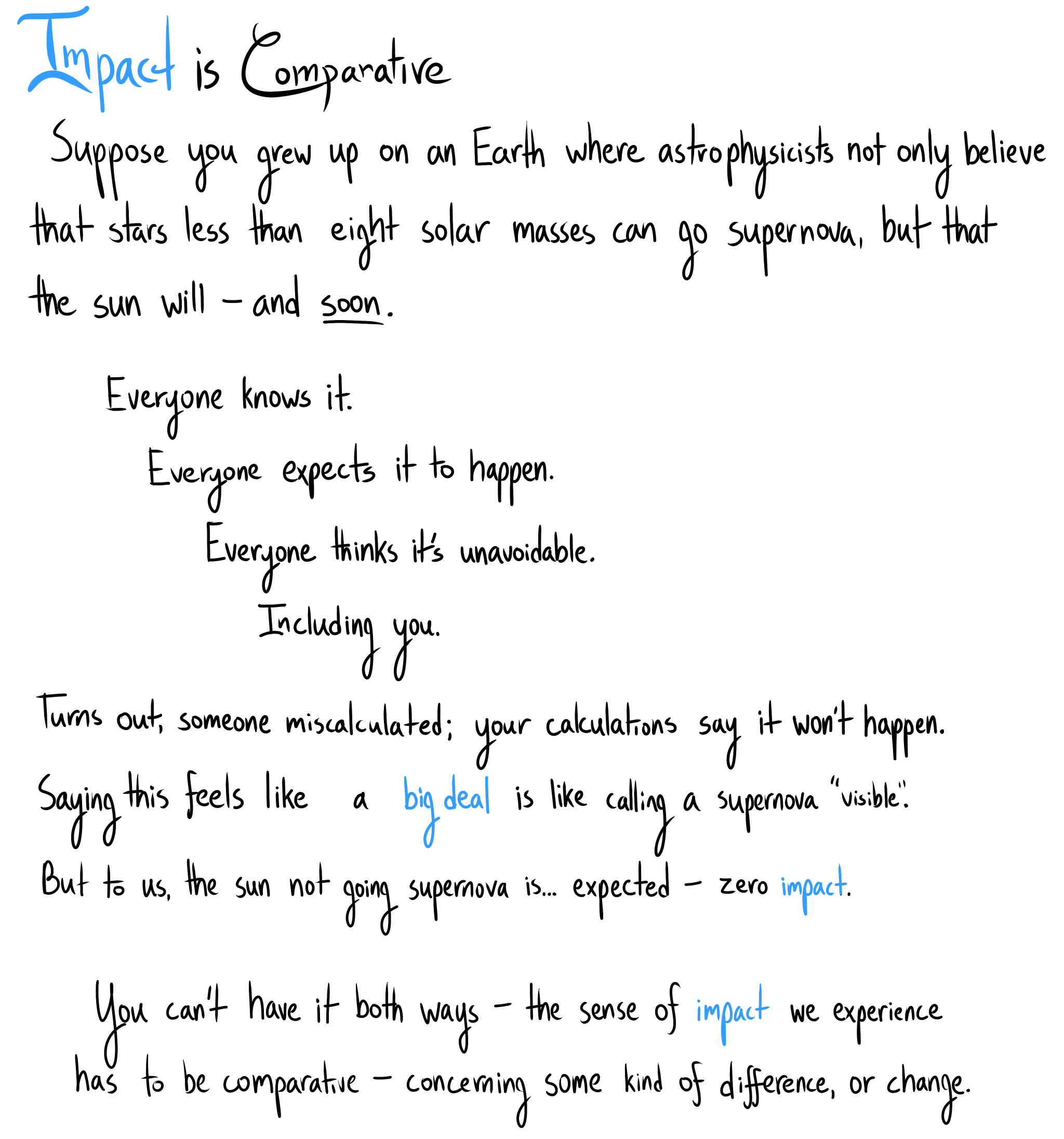 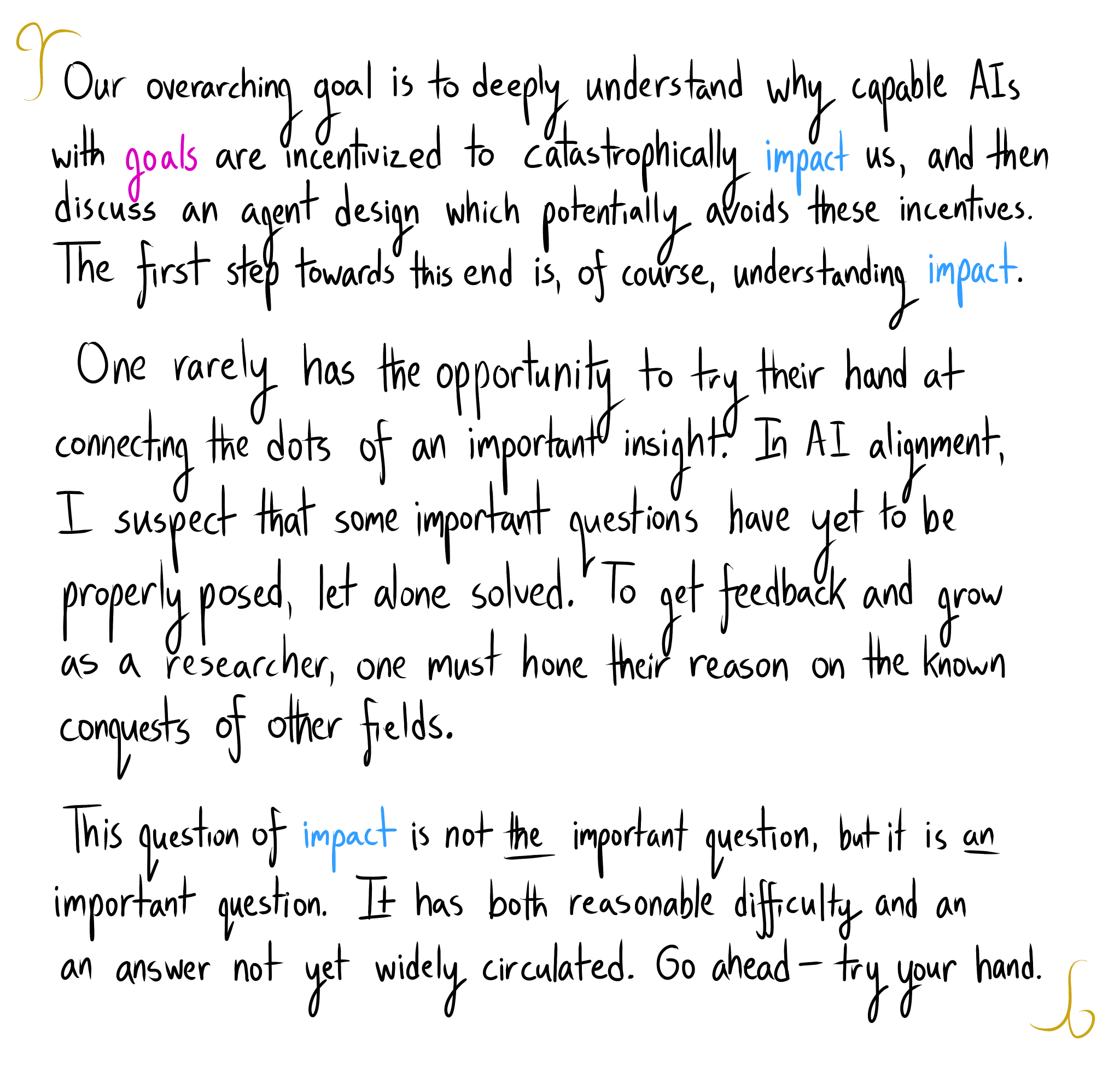 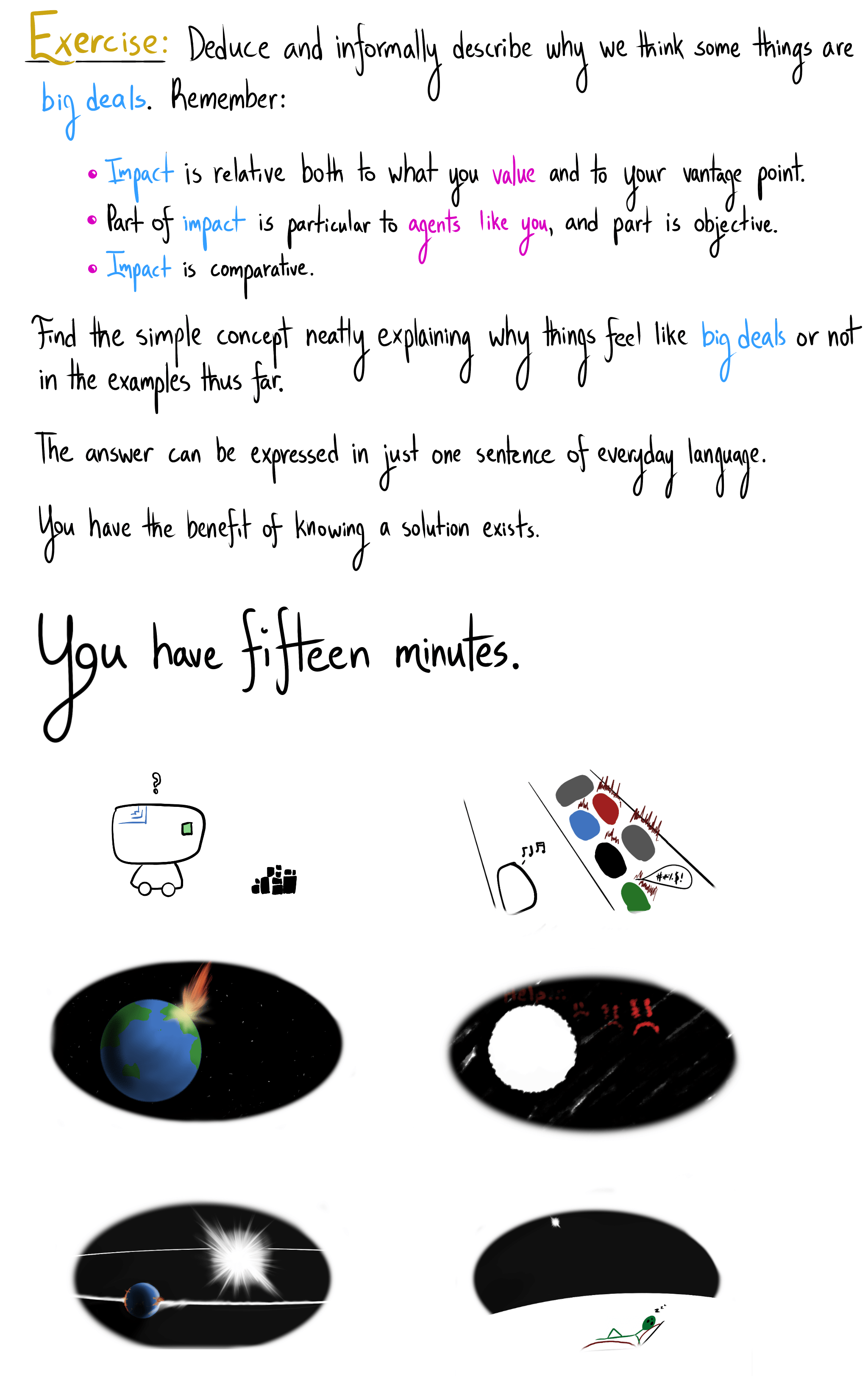 The solution comes in the next post! Feel free to discuss amongst yourselves.

Reminder: Your sentence should explain impact from all of the perspectives we discussed (from XYZ to humans).

Previous:
Value Impact
8 comments62 points
Next:
Attainable Utility Theory: Why Things Matter
24 comments60 points
Log in to save where you left off
26 comments, sorted by
top scoring
Click to highlight new comments since: Today at 7:37 AM
New Comment
[-]adamShimi2y 10

What I came up with before reading the spoilers or the next posts in the sequence:

A big deal is any event that significantly changes my expected ability to accomplish my goals (whether by having an impact specific to me, or an objective impact).

Late to the party, but here's my crack at it (ROT13'd since markdown spoilers made it an empty box without my text):

I set a fifteen minute timer, and wrote down my thoughts:

Okay, the main thought I have so far is that the examples mostly seem to separate “Affects personal goals” from “Affects convergent instrumental goals”.

1. The pebbles being changed mostly affects the pebble sorters personal goals, and otherwise has little impact in the scheme of things for how able everyone is to get their goals achieved. In the long term, it doesn’t even affect the pebblesorters’ ability to achieve their goals (there basically is a constant amount of resources in the universe to turn into pebbles and sort, and the amount on their planet is miniscule).

2. The badness of the traffic jam is actually mostly determined by it being bad for most agents’ goals in that situation (constrained to travel by cars and such). I might personally care more if I was in a medical emergency or something, but this wouldn’t be true from the perspective of convergent instrumental goals.

3. Asteroid hitting earth damages any agents’ ability to affect the world. We care more because we’re on the planet, but overall it is determined by convergent instrumental goals.

4. Star exploding is the same as asteroid on earth.

5. Not sure the point of the last one regarding epistemic state.

I have a sense that TurnTrout is suggesting we build an AI that will optimise your personal goals, but while attempting to make no changes on the level of convergent instrumental goals - kill no agents, change no balances of power, move no money, etc.

However, this runs into the standard problem of being useless. For example, you could tell an agent to cure cancer, and then it would cure all the people who have cancer. But then, in order to make sure it changes no balance of power or agent lives or anything, it would make sure to kill all the people who would’ve died, and make sure that other humans do not find out the AI has a cure for cancer. This is so that they don’t start acting very differently (e.g. turning off the AI and then taking the cancer cure, which *would* disturb the balance of power).

Hmm. I do think it would be somewhat useful. Like, this AI would be happy to help you get your goal as long as it didn’t change your power. For example, if you really wanted a good tv show to watch, it would happily create it for you, because it doesn’t change your or other agents’ abilities to affect the universe. (Though I think there are arguments that tv shows do affect humans that way, because the interaction between human values and motivations are a weird mess.) But, for example, I think the pebble sorters could build an AI that is happy to produce things they find valuable, as long as it doesn’t upset broader power balances. Which is potentially quite neat, and if this works out, a valuable insight.

But it doesn’t do the most important things, which are ensure that the future of the universe is also valuable. Because that’s necessarily a power thing - privileging a certain set of values over convergent values. And if you tried to combine such power-averse AIs to do a powerful thing, then they would stop doing it, because they’re superintelligent and would understand that they would be upsetting the power balance.

Okay, that’s my fifteen minutes. I don’t think I got what TurnTrout was trying to guide me to getting, even though I think he previously told me in person and I've read the next post. (Though maybe I did get it and just didn't manage to put it in a pithy sentence. )

What you're inferring is impressively close to where the sequence is leading in some ways, but the final destination is more indirect and avoids the issues you rightly point out (with the exception of the "ensuring the future is valuable" issue; I really don't think we can or should build eg low-impact yet ambitious singletons - more on that later).

My answer to this was

I stopped the timer after five minutes because the answer just seemed to work.

Thought as I worked through the exercise:

Starting assumptions: impact is measured on a per-belief basis, depends on scale, and is a relative measurement to prior expectation. (This is how I am interpreting the three reminders at the end of the post.)

To me, this sounds like a percent difference. The change between the new value observed and the old value expected (whether based in actual experience or imagined, i.e. accounting for some personal bias) is measured, then divided by the original quantity as a comparison to determine the magnitude of the difference relative to the original expectation.

My sentence: You can tell that something is a big deal to you by how surprising it feels.

Now the drop from U1 to U2 would be more dramatic (decrease by 100%) compared to the drop from U0 to U1 (decrease by 99%) if we were using percentages. But I think the agent should 'care more' about the larger drop in absolute utility (i.e. spend more resources to prevent it from happening) and I suppose we might want to let impact correspond to something like 'how much we care about this event happening'.

That would depend on whether things have a multiplicative effect on utility, or additive.

For ease of reference, I'm going to translate any ROT13 comments into normal spoilers.

Impact is the amount I must do things differently to reach my goals Atleast three big strong intuitions. A thing that happens if it turns the results of my current actions to be way worse is big impact. A thing that happens if the feasibility or utility of action at my disposal is changed a lot then that is a big deal (which often means that action must be performed or must not be performed). If there is a lot of surprise but the way to overcome the surprises is to carry on exactly as I was already doing is low to no impact.

Nitpick: one should update based on observations, as opposed to "X has occurred with certainty".

We're talking about the impact of an event though. The very question is only asking about worlds where the event actually happens.

If I don't know whether an event is going to happen and I want to know the impact it will have on me, I compare futures where the event happens to my current idea of the future, based on observation(which also includes some probability mass for the event in question, but not certainty).

In summary, I'm not updating to "X happened with certainty" rather I am estimating the utility in that counterfactual case.

I'll take a crack at this.

To a first order approximation, something is a "big deal" to an agent if it causes a "large" swing in its expected utility.

I think I might be spoilered from reading the original paper, but my guess is "The impact to someone of an event is how much it changes their ability to get what we want". Humans care about Iniron existing because it makes it harder to reduce suffering and increase happiness. (Not sure how to square this definition of impact with finding out new info that was already there, as in the case of Iniron, it had already existed, we just found out about it.) Pebblites care about all their pebbles becoming obsidian because it changes their ability to stack pebbles. Both humans and pebblites care about being hit by an asteroid because it's harder to pursue one's values if one is killed by an asteroid.

In draft.js, you have to start a new line. Like a quote. In Markdown, you do spoilers differently.

Check out the FAQ.

Speaking as someone who hit "Edit" on his post over 10 times before checking the FAQ: if you haven't messed with your profile settings about handling comments/posts yet, save yourself some time and just check the FAQ before trying to add spoiler text. The right formatting wasn't as obvious as I expected, although it was simple.

If I'm already somewhat familiar with your work and ideas, do you still recommend these exercises?

Probably, unless you already deeply get the thing the exercise is pointing at. I wrote this sequence in part because my past writing didn't do a great job imparting the important insights. Since I don't a priori know who already does and doesn't get each idea, you might as well follow along (note that usually the exercises are much shorter than this post's).

The spoiler seems to be empty?

So secret that even a spoiler tag wasn't good enough.

I am wondering about the link between the notion of distance (in the first post), extremes in a utility scale, and big deal. That's me in 15'