The Born Rule is Time-Symmetric

The Born rule states that if an observable of a particle in state |ψ⟩ with eigenvalues {λ1,λ2,…} is measured then the probability of yielding a particular eigenvalue λi equals |⟨λ|ψ⟩|2.

In quantum mechanics, time-reversal is performed by complex conjugation ψ→ψ∗. If we apply time-reversal to the Born rule then all the math stays the same except |ψ⟩ becomes |ψ∗⟩.

The mathematics for time-reversing the Born rule is straightforward complex algebra. I use the variable V to indicate an arbitrary vector of complex values {v1,v2,…}.

We traditionally think of the multiverse as several possible futures branching off of the present.

But we have just shown that the arrow can be reversed. All possible futures are also possible pasts. 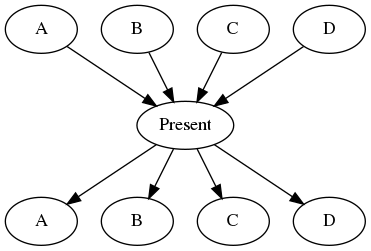 The physics establishment sidesteps this quandary by defining time to progress in the direction of increasing entropy.

An ontology O is an associative operator that buckets a set of microstates m={mi} into a smaller set of macrostates M={Mi}.

The entropy of a state equals the natural log of its macrostatic degeneracy.

The Random Walk of Time

The only thing you directly experience is this instant right now. The past and future are inferences. They are not empirical observations.

We can treat the multiverse as a graph of microstates. Edges connect microstates to their immediate pasts and futures. The edges are bidirectional because the Born rule is time-symmetric.

A random walk along the bidirectional graph of microstates (almost always) moves in the direction of increasing entropy until you approach the heat death of the universe.

We have dissolved time in a way that adds up to normalcy. This theory, which I call the Theory of Entropic Time, predicts that localized quantum fields will maximize proper time and that is exactly what we observe.

I find the title extremely misleading. Projecting always loses information about the full state, so in that sense there no time symmetry, as the arrow of time is irreversible.

tl;dr -- life is a random walk and then you die: this is the fundamental principle of universe and time

Maybe because of my relative unfamiliarity I seemed surprising that complex conjuation is how you do time-reversal. Where one does pull that from? I do know that a lot of things are required to be hermitian which essentially means that the complex conjucate needs to be equal to the standard in magnitude.

Does me being classical mean that I am definetely in this state and not in any other state ie there is less different looking microstates. Wouldn't that mean that it is a macrostat of exactly one micro state?

Reading up on entropy I was of the understanding that one can't make arbitrary collections of microstates into macro sttes but they must be carved "right" in some sense. And that experts disagree what the requirements are.

If the present is a degenerate macrostate and the bidirectional graph is supposed to be about microstates there should be atleast two balloons included in the present.

I too would like to see a citation for this proposition

> In quantum mechanics, time-reversal is performed by complex conjugation ψ→ψ∗

I worked my way through the QM textbook and this does not compute AFAIK.

See also this paper for more discussion on why the time reversal operator ought to behave in this way and on time reveral in general.

For the benefit of others reading this, in Shankar's book referenced below, this is said to not be a full symmetry i.e. not always valid.

Also there is no time-reversed Copenhagen measurement process in the theory which he implicitly requires.

Think about a massive object like a planet moving from L to R. It is massive so quantum effects can be ignored. It is clearly not true that the planet would be measured as being in the same place 10 minutes ago and 10 minutes hence. So the statement "All possible futures are also possible pasts" is wrong.

Whenever time appears in the wave equations it's multiplied by i, so taking the complex conjugat is equivalent to replacing t with -t.

You're not classical, you just decohere very quickly.

For the rest, I'd have to think about your question more before answering.

Does this generalize from the Born rule to continuous decoherence?

And why there is a walk at all? I mean, sure, memory is just consequence of wave equation like everything all, but I' m still having trouble conceptualizing timeless interaction...

Yes, it does generalize.

Don't think of it in terms of interaction. Think of it as relationships within a static network. The laws of physics constrain the network into a quasicrystalline structure.

Some nodes in this network are self-aware. The self-aware nodes tend to form channels which we call "people". When the channels fork we call it "decoherence".

Suppose you run a temporally causal experiment at macrostate M0. For example, you drop a ball and want to see if it falls down to the ground. The results of your experiment cannot be located in the multiverse at M0 because M0 is where you released the ball. The ball has not moved nor has the clock ticked inside your head. Neither can the results of your experiment be located far away from M0 because the initial experimental macrostate M0 is self-locating information[1]. If such a state existed anywhere in the multiverse then it would be located at M0 by definition.

The entropy of the macrostates where the clock in your head and the ball have both ticked forward in time vastly outnumber the entropy of all alternative macrostates within Omδ. To a self-aware macrostate inside the multiverse, time is experimentally equivalent to a random walk along microstates—and is easily mistaken for causality—but time is fundamentally just the inside macrostatic view of a timeless quasicrystalline structure.

If first, how does it work with the whole (region of) wavefunction evolving simultaneously? I guess I just have unresolved doubts about timeless distribution of amplitude, like does it actually checks out that past and future are always in the neighborhood in relative configuration space? Or how do you normalize amplitude over expanding space? And in that picture  without interaction it's harder for me to, well, justify laws that generate amplitudes for neighboring states.

Both. Mδ is a neighborhood of spacetime.

If first, how does it work with the whole (region of) wavefunction evolving simultaneously?

The analogy to the experiment with you and the ball is recursive. You can divide the ball in half over and over again like Zeno.

…like does it actually checks out that past and future are always in the neighborhood in relative configuration space?

It is best to think first of configuration space as constrained by the laws of physics. Take it as a prior. Then proceed to the following paragraph.

Or how do you normalize amplitude over expanding space?

I'm guessing you're referring to normalization of the wavefunction here? This is related to subjective experience in a multiverse and does not depend on this post's novel theory.

No. Is there a way you could rephrase this question without using the word "deterministic"? "Deterministic" implies causality and the original post describes a timeless multiverse.

You say this theory of your predicts "that localized quantum fields will maximize proper time". It's not clear how it's a prediction of this theory, since the statement of the prediction is the first time you mention proper time in this article. I looked through the follow-up link to see if the prediction came from there, but the link doesn't mention entropy (nor does this post mention action). And I don't believe that "The physics establishment sidesteps this quandary by defining time to progress in the direction of increasing entropy" is a fair assessment of how most physicists think about time and entropy. If you want to talk about the physics establishment and entropy, it would be helpful to address the work on fluctuation theorems.

I also have problems with the description of Lagrangian mechanics in the link about proper time. The description of the δq in Noether's theorem as being "oriented along the direction of the particle's path" isn't accurate; it's oriented in whatever direction corresponds to the symmetry in question. The statement that Lagrangian density should be considered as a "temporal velocity density" doesn't have any justification, and seems difficult to mesh with the Lorentz invariance of the Lagrangian density. The substitution made for the field theory version of the Euler-Lagrange equation in terms of the d'Alembertian of the Lagrangian density is also incorrect.

The earlier post has problems of its own: it works with an action with nonstandard units (in particular, mass is missing), its sign is backwards from the typical definition, and it doesn't address how vector potentials should be treated. The Lagrangian doesn't have to be positive, so interpreting it as any sort of temporal velocity will already be troublesome, but the Lagrangian is also not unique. It simply does not make sense in general to interpret a Lagrangian as a temporal velocity, so importing that notion into field theory also does not make sense.

The problem with all these entropic arrows of time is that a time reversible random walk tends to increase entropy both forward and backward in time. Without touching on time reversibility, fluctuation theorems, Liouville's theorem in classical mechanics and unitarity in quantum mechanics, fine-grained vs coarse-grained entropy, etc, I don't think this makes sense as an explanation of the arrow of time. As a physicist, this doesn't come across as a coherent description.