Prefer the British Style of Quotation Mark Punctuation over the American

Writing (communication method)Practical
Frontpage
This is a linkpost for https://www.erichgrunewald.com/posts/the-american-style-of-quotation-mark-punctuation-makes-no-sense/

There are different ways of combining quotation and punctuation marks. In the American style, you almost always put periods and commas inside the quotation marks:

Dr Johnson kicked a large rock and said, as his foot rebounded, "I refute it thus."[1]

It is only an accident of evolution, as it were, that the senses we are born with are not adapted to feel such things "directly."[2]

Dr Johnson kicked a large rock and said, as his foot rebounded, "I refute it thus."[3]

It is only an accident of evolution, as it were, that the senses we are born with are not adapted to feel such things "directly".[4]

When faced with this contrast, the proper reaction is to recoil in horror at the first approach, and to look approvingly on the second. In the sentence beginning with It is only ..., the quotation is a part of the sentence, and the sentence contains the quoted word.

Since a period marks the end of a sentence, it should not be placed before marking the end of the quotation. You can compare this with nested or hierarchical structures, or with stacks, or even with last in, first out methods of computing, inventory accounting or redundancy management. Under any comparison, the British style will seem preferable to the American. You resolve the nested item first, before resolving the parent. I do not know but suspect that this is why the British style is also called logical quotation.

In the sentence beginning with Dr Johnson ..., we do place the period within the quotation marks, because what is being quoted is a full sentence. We are placing the period to mark the end of the inner, quoted sentence.[5]

There is no reason that there should be two different approaches to punctuation in the English language. The British approach makes more sense, so use that one.

When movable types entered the picture almost no types set had unified quotation+punctuation types, so both were physically distinct symbols that needed a sequence when placed on the printing board. Over time the US mostly settled with punctuation-then-quotation, while most other countries went mostly with quotation-then-punctuation -- which on further analysis (and then with programming languages) proved more sensible.

Nowadays with modern Unicode ligatures we could easily go back to quotation-over-punctuation for display purposes, while allowing the writing to be either way, but I suppose after 200 years of printing these glyphs separately no one has much interest in that.

I've always thought the British style puts an awkward amount of space between a comma or period and the word preceding it. It's even worse if you start using it with American-style double quotes.

Interesting discussion here on blog of the Chicago Manual of Style, which supports the American convention:

But notice how the commas and the period in the example of Chicago style appear consistently right next to the words they follow [...], creating a pleasing uniformity along the baseline. In British style, placement is interrupted by the quotation marks, though the gap is smaller than it would be with double rather than single marks.

Personally, I alternate between the two styles like a total maniac.

I personally think quotation-over-punctuation would solve this nicely. Here's an example from someone who managed to have his TeX documents do exactly that: 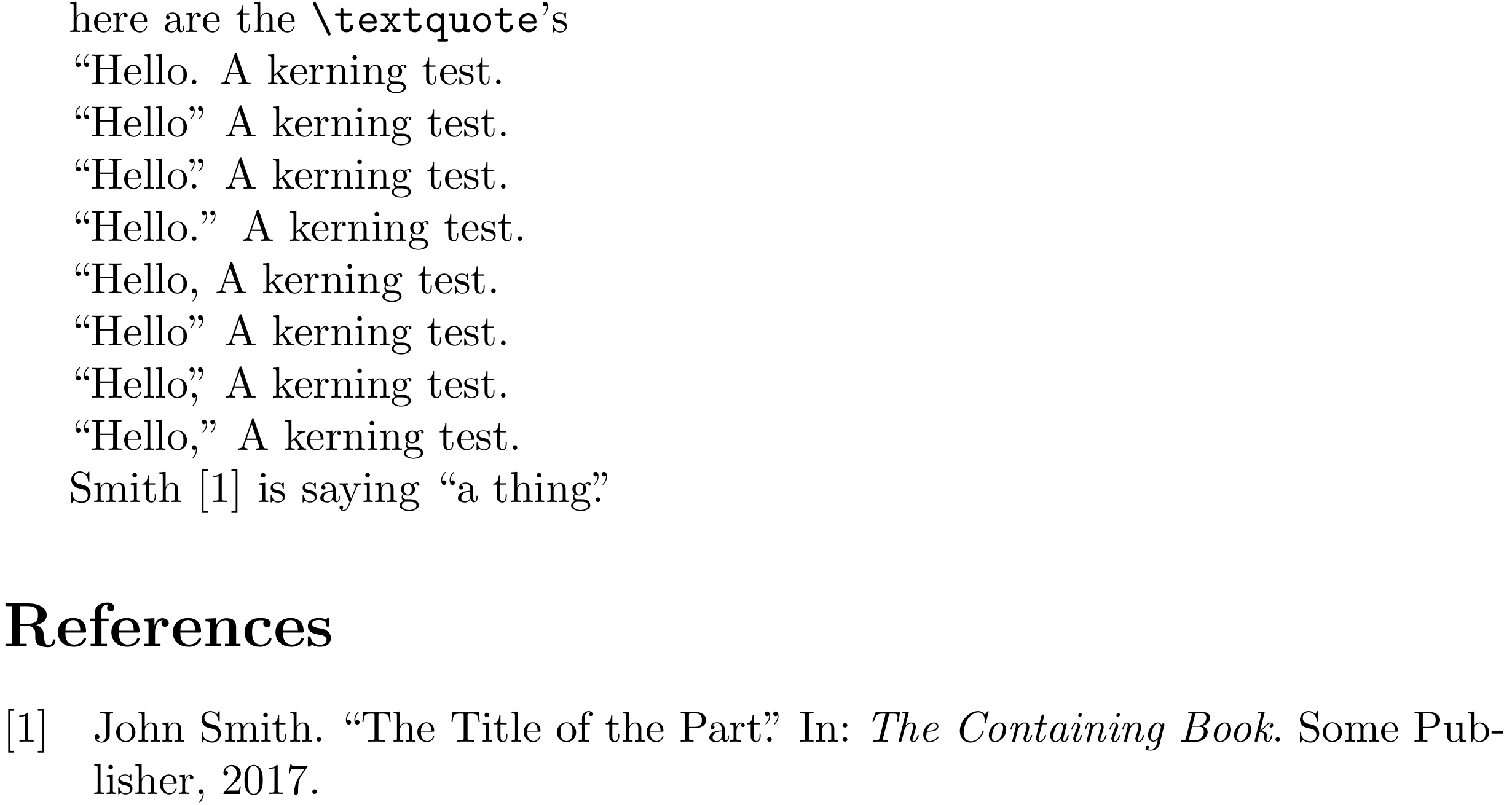 An argument could even be made for using a second period to close the outer sentence after resolving the inner sentence and the quote.

Dr Johnson kicked a large rock and said, as his foot rebounded, "I refute it thus.".

This looks weird to me because it's not what I'm used to, but it makes logical sense.

Indeed, this is what I use. It feels much more natural to me in the following case, where obviously our statement is not a question:

Dr Johnson kicked a large rock, and said, as his foot rebounded, "Do I refute it thus?".

And "obviously" the full stop should go outside, because of:

Dr Johnson kicked a large rock, and said, as his foot rebounded, "Do I refute it thus?", howling with pain.

And there's nothing special about a question mark, so this rule should be identical if a full stop is substituted.

That's what I do. I know it is wrong but honestly, I don't care. It just makes more sense.

This is a very good situation for the punctuation under the quotes method alexgieg suggested.

That's great. If I ever attempt to design my own conlang, I'm using this rule.

I remember being taught the American style as a kid, and deciding that it was stupid and that I simply wasn't going to follow it (except for when sucking up to authorities).

Despite being American, I'm also a programmer. I'm well aware of the American style, but choose not to use it. American style "looks better" arguably, only because we're used to it, but English style makes more sense, and is more consistent with how we punctuate around parentheses.

One thing I dislike about the 'punctuation outside quotes' view is that it treats "!" and "?" differently than a full stop.

"This is an exclamation"!
"Is this a question"?

Seems less natural to me than:

"This is an exclamation!"
"Is this a question?"

I think have this intuition because it is part of the quote that it is an exclamation or a question.

This style feels much better when the embedded sentence requires a different punctuation type than the parent sentence, such as "Don't you think?". I expect it only looks "ugly" because we don't typically see things done this way.

I like the explicit sentence ends in written form. However sometimes in oral communication the meaning is dependent on where the punctuation would be put would it be written down. "Eat, grandpa please" vs "Eat grandpa, please". If you have a lot of punctuation concentrated in one place it can get muddy how that would be turned into oral speech. So I can see how keeping punctuation "top-level only" can make sense.