Luna Lovegood and the Chamber of Secrets - Part 10

Luna had been spending more and more time in the Forgotten Library. Half a year slipped by.

"Is there somewhere safer I can think?" Luna asked Lady Yue.

Luna had three magical artifacts of incredible power. One was a map of Hogwarts. One put its user into a catatonic state. Luna withdrew her astrolabe.

Two witches stood on a sidewalk wider than a London street. Lady Yue guided Luna to the old city wall. 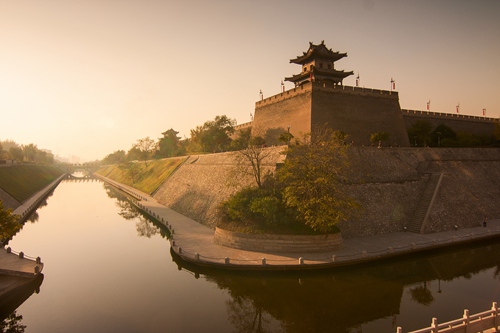 The original Xi'an was surrounded by a moat, giving it the appearance of resting on a motte. The walls were almost taller than the trees planted on the berm. The gatehouse used circular arches in contrast to Hogwarts' Gothic arches. The top was decorated with flags and lanterns the colors of Gryffindor. You could ride carriages four abreast along the top. Scattered Muggle tourists moseyed about. 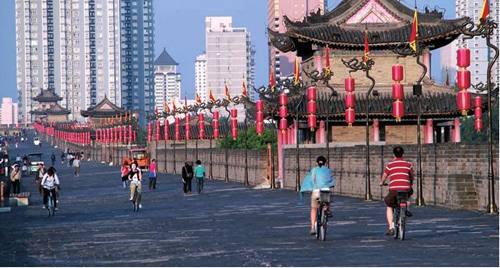 Britain was a small, desolate rock as far from civilization as the Earth is from Sagittarius A*. Lady Yue gestured toward the real city.

Infantry in red scale armor patrolled the walls of Chang'an with repeating crossbows. Three wizards rappelled to perform maintenance on a giant retractable circular saw blade protruding horizontally two-thirds of the way up the wall. Witches in blue plate armed with spears and bungee cables dived off the machicolations to practice semi-aerial combat. An armored vehicle was positioned between every pair of guard towers, which were armed with siege flamethrowers and rocket turrets. Chang'an had survived land wars in Asia.

"How long has it been Fideliused?" asked Luna.

"I guess you're not coming with me then," said Luna.

Lady Yue handed Luna a slip of paper with English directions in black on the back, ancient runes in black on the front and a large Heirloom Seal of the Realm stamped in red on both sides. Two suits of armor with soldiers in them allowed Luna through the checkpoint.

Curious citizens swarmed Luna. They said words she couldn't understand and thrust strange foods into her arms. Luna showed her instructions to a especially helpful bicycle. It zipped Luna through the city.

Luna smelled oyster sauce and stinky tofu. She passed a self-woking food stall and old men wargaming on the sidewalk. Luna gripped the handlebars tighter as the bicycle showed off. The bicycle dinged happily. They screeched to a halt.

A gyrocopter was parked on the roof of the laboratory. A fission reactor stuck through the top of the garage. Six different styles of radio dish poked out of six open windows. Luna entered through the airlock. She bumped her head on a ceiling-mounted security camera.

"Stand down," said the halfling artificer to the security system, "It's nice to meet you. We don't often have visitors from outside. What is your name? My English name is Leet Haxor Zεr0, or LZ (Lizzie) for short. The empress dowager says you are from Britain. I have heard all about Britain. Do all British Muggles travel through time and space in telephone booths or is public transit restricted to aristocrats? I have acquired three but none of them seem to work. I suspect magic in our air is interfering with the Muggle technology."

Luna didn't know what to say so she gave Lizzie a rice roll and a box of chicken feet.

"Thanks. I haven't eaten in three days. You know how it gets when you get deeply absorbed in a project," said Lizzie.

Lizzie guided Luna to the guest room, a planetarium not yet entirely filled with Muggle artifacts.

"You can store your clothes in the wardrobe. Leave space for the ghost inside that looks just like you. Don't let it freak you out. The ghost has never hurt anyone in the many times it has appeared over the decades," Lizzie said.

There was a siren.

"I have to adjust the reactor control rods," Lizzie said, "Holler if you need anything."

There were no windows in the planetarium. Light came from a giant projection of Saturn and the starfield behind it.

Luna exhaled. The Fidelius Charm would protect her from Rowena's basilisk. Luna hid in the wardrobe to bulwark causality.

Luna found the location on the Marauder's map where the bones of Slytherin's basilisk lay. Luna monitored that place in space as she adjusted the time dial of the astrolabe backwards. The Ministry archaeologists came and went. Other wizards came and went earlier but did not pass the bones of the basilisk. The basilisk's killer appeared. Tom Riddle. Luna tuned her astrolabe back into causal time.

The photos of Xi'an come from China Daily. link

The image of Chang'an comes from a 2016 historical documentary starring Matt Damon. link

The GPT-3 vibes are getting stronger. I don't entirely see the story significance of the second and third part of this chapter.

I guess... Luna needed a place covered by the Fidelius Charm to protect herself from Rowena's Basilisk (like in the Antimemetics Division) while using her mother's astrolabe, and for some reason the one such place anyone in the story knew about was in China?

On a separate note:

"I solemnly swear I am up to no good."

This was an amusing part of canon Harry Potter, but in the Less Wrong / HPMoR meme space, I find this oath very unsettling. It's like the antithesis of Harry's Unbreakable Vow not to destroy the world. And using the Marauder's Map this time indeed results in a terrible misunderstanding.

a) According to Eliezer, the Fidelius Charm was immediately used in 683 CE to hide the charm itself and therefore doesn't show up in HPMoR-verse. So this chapter doesn't seem consistent with HPMoR-canon - Luna certainly couldn't mention the Charm unprompted. Which is fine, though does have to be pointed out, since the HPMoR story couldn't have happened the way it did if the ridiculously overpowered Fidelius Charm existed and was still available in modern times.

b) Regarding the astrolabe: It may not necessarily violate the time travel restrictions in HPMoR, but doesn't it violate or circumvent the Interdict of Merlin, as it would allow its user to spy on powerful wizards of the past? I suppose the Interdict could still kick in and blur the representation in the astrolabe.

b) As I recall, the Interdict demands that powerful magics be transmitted directly from one living mind to another. That would not be the possible when one is spying on the past.

Spoilers for HPMoR (though I guess that's a given at this point):

c) how does she miss the fact that the map shows two Tom Riddle's walking down the passage way to the graveyard? That should not be easy to miss. It says "it was tangled and confused", but it would still show the name twice, and if she can read the one, it stands to reason she could read the other. Especially since we have precedent from HPMoR of both being in the same room without the map being confused.

Okay, just fyi, I dropped the other thing I was doing when I saw this episode had come out, and immediately read it.

I think "woking" refers to this.

had slayed -> had slain

Actually, if "degrees east" was correct, I think maybe the next line should also change:

I don't see how "An astrolabe displays the universe's location relative to itself" implies that the values should be negated. If you negate coordinates you are only defining a different point, but I might be confused here. I am used to using lat and long to define my position relative to the planet, not the planet's position relative to me. Though really, I fail to see the difference. Either way, North and East are positive, South and West are negative.

Also: The modern standard way to denote lat and long (at least among seafarers) is in degrees and decimal minutes, making the above position look like so: 34° 16.62' N, 108° 56.7' E. This is the format I use daily as a skipper. The traditional way is with degrees, minutes and seconds, like so: 34° 16' 37.2" N, 108° 57' 42" E. Decimal seconds were rarely used, as seconds already gives us accuracy down to ~30 meters, which is better than any practical method of navigation at the time. Seconds without decimals is what I would have predicted an old artifact like that to use, given it's implied age.

The use of decimal degrees and negitive numbers is a modern thing, to cater to digital devices and google maps and the like. This is a minor nit-pick, but I would find 34° 16' 37" N, 108° 57' 42" E more harmonious with the rest of the story.

Thank you for writing this :)

I had originally intended for the numbers to be negated. After reading the discussion and thinking about it, I changed them to not be negated. Negating one of them but not the other, as I did by mistake, is completely wrong. This story is not intended to explore chirality.

Your traditional nautical coordinates are much better. I have changed it to degrees, minutes and seconds.

I feel honoured :) But it appears that I made a mistake: I believe it was supposed to be 34° North, not 32° as I wrote. Just a typo. I'm not really sure what position is actually intended though. Note that Google Maps seems to be confused in the area, and the streetgrid is offset from the satellite image. This seems very appropriate :)

Further nitpick: you dropped one " in the new text above.

Re: Google Maps being offset in China. See this for explanations:

The muggles are finding very elaborate ways to justify the confusion to themselves!

Cool! But you only corrected my mistake in the second instance, not the first.