When I was 13, the coolest thing in the world was Seto Kaiba summoning a Blue-Eyes White Dragon.

The name "Blue-Eyes White Dragon" is a translation of the Japanese "青眼の白龍".

The word "青" heralds back to a time before the adoption of green (緑) in the Heian period. I speculate that before the Heian period the primary colors used to be white, black, red, gold and 青. "青" is usually translated as "a color spanning blue or green". But to define "青" in terms of blue and is to contort it into a foreign ontology. We don't define "blue" as "a color spanning голубой and синий".

To us, "blue" is a singular color with an ideal RGB value around 0x0000ff. 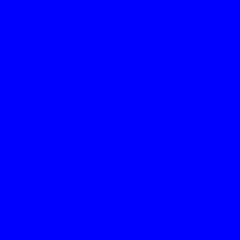 For comparison, here are the corresponding English results for "blue".

At first glance, these colors appear similar—and they are. But, conceptually, they are derived from different things. The first (top left) image of Japanese 青 is lighter than the equivalent image of English blue. 青 is the color of the sky as seen between clouds or reflected by the ocean. "Blue" is the color of indigo dye and blue jeans. That's why we have to specify the "sky blue" variant in English. "Blue" is the color of blue pigment.

What about the Chinese 青 from which the Japanese 青 is derived?

I hypothesize the Japanese 青 used to be the same as the Chinese 青 but the Japanese ontology of colors drifted towards the European concept of blue due to greater cultural influences from the West.

Mentioned in
45Here's a List of Some of My Ideas for Blog Posts
39[Letter] Advice for High School #2
30A Word to the Wise is Sufficient because the Wise Know So Many Words
8 comments, sorted by
top scoring
Click to highlight new comments since: Today at 10:39 PM
New Comment
[-]Gunnar_Zarncke1y 8

It would have been interesting if the XKCD color survey would be repeated in other languages (or geographies). Anyway, I think it is relevant to the topic here: https://blog.xkcd.com/2010/05/03/color-survey-results/

My understanding is that the meaning of 青 did not drift because of increasing western contact so much as abruptly change with a single cause:

But the real change came during the Allied occupation of Japan after World War II, when new educational material started to circulate. In 1951, teaching guidelines for first grade teachers distinguished blue from green, and the word midori was shoehorned to fit this new purpose.

The previous sentence in the source does talk about crayons in 1917, though.

The color blue has other interesting associations too. You mention it as the color of the future, but in English it's also the color of sadness. In fact, notice how future-blue is quite frequently a color associated with emotionless machines, sterile broken utopias, oppressive orderliness, coldness, and similar unpleasantnesses. Due to movie making's need for visual contrast this also resulted in the color of chaos, happiness, warmth, and life becoming orange, even if it hadn't that association before (I don't know whether it did).

Curiously, here in Brazil there's some association between blue and happiness, not of the effusive kind, more that of a calm contentment. The lyrics for a famous song by Brazilian soul singer Tim Maia puts it so (my translation):

English has different words for those two colors, too, "blue" and "cyan". Also, I don't think "Eurocentric paint" is a thing. Paint is not an idea.

English has different words for those two colors, too, "blue" and "cyan".

Languages have many words, but some of them are more... native... then others. How often do non-specialists use the word? How many 10-years old kids would recognize the word?

So, the thing is that English technically has the word "cyan", but regardless, the American sky is blue; only the ink in printers is cyan.

Or in other words: Color words don't refer to points in color space, they refer to regions, which means that you can look at how those regions overlap -- some may be subsets of others, some may be disjoint (well -- not disjoint per se, but thought of as disjoint, since obviously you can find things near the boundary that won't be judged consistently), etc. Having words "blue" and "cyan" that refer to two thought-of-as-disjoint regions is pretty different from having words "blue" and "cyan" where the latter refers to a subset of the former.

So, it's not as simple as saying "English also has a word cyan" -- yes, it does, but the meaning of that word, and the relation of its meaning to that of "blue", is pretty different. These translated words don't quite correspond; we're taking regions in color space, and translating them to words that refer to similar regions, regions that contain a number of the same points, but not the same ones.

The bit in the comic about "Eurocentric paint" obviously doesn't quite make sense as stated -- the division of the rainbow doesn't come from paint! -- but a paint set that focused on the central examples of basic color terms of a particular language could reasonably be called a that-language-centric paint set. In any case the basic point is just that dividing up color space into basic color terms has a large cultural component to it.

"Eurocentric paint" is an imprecise phrase. I first read it as meaning "traditionally-used European paints", with the implication that other cultures chose their colors based on different paints. But the rest of the post makes clear it's the idea of basing colors on paints that's allegedly Eurocentric; so the better phrasing might be "Eurocentric fixation on paint".

I was taught in (US) school that the primary colors were red, yellow, and blue and the secondaries were green, orange and purple (which matches the 'rainbow' in the comic, though the 'rainbow' I learned was ROYGBIV).  Per https://en.wikipedia.org/wiki/Color_theory#Traditional_color_theory, this only works with paint:

One reason the artist's primary colors work at all is due to the imperfect pigments being used have sloped absorption curves, and change color with concentration...  Another reason the correct primary colors were not used by early artists is they were not available as durable pigments. Modern methods in chemistry were needed to produce them.

Granted, I was taught those colors in conjunction with being given paint to play with, which is a good reason to teach them. But it's still a bit striking that at no point in my education was I taught any other set of primary colors, except implicitly by picking RGB colors in MS Paint (an ironic name, in context).

I'm pretty sure that the common intuition among my classmates, way back in childhood, was that the first-tier colors were red, yellow, blue and green.  This turns out to be supported by a relatively sophisticated color theory based neither on natural occurrences of colors nor on any means of producing colors but rather the brain's fundamental abstractions for processing them.