In the Pareto world, liars prosper

This is a simple picture proof to show that if there is any decision process that will find a Pareto outcome for two people, it must be that liars will prosper: there are some circumstances where you would come out ahead if you were to lie about your utility function.

Apart from Pareto, the only other assumption it needs are that if the data is perfectly symmetric, then the outcome will be symmetric as well. We won't even need to use affine independence or other scalings of utility functions.

So first assume Pareto-optimality, symmetry, and (by contradiction) that liars don't prosper. The players are x and y, and we will plot their utilities in the (x,y) plane. The first setup is presented in this figure: 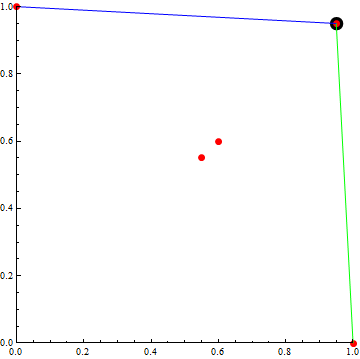 The Pareto optimal boundary of this is: 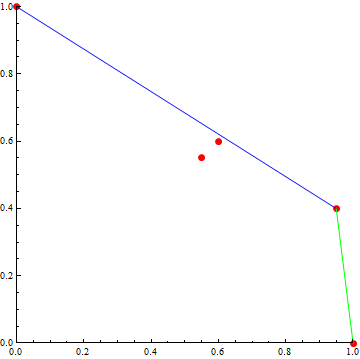 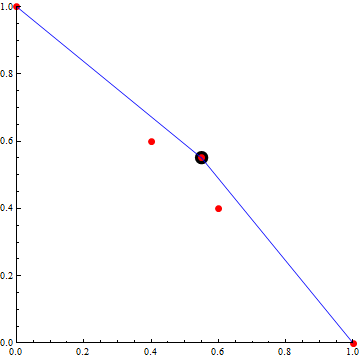 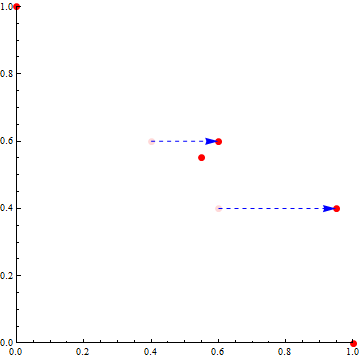 You will no doubt be astounded and amazed to realise that this setup is precisely the same as in the third figure! Now, we know that the outcome for that must lie along the green line between (1,0) and (0.95,0.4). Translating that green line back into the real utility for x, you get: 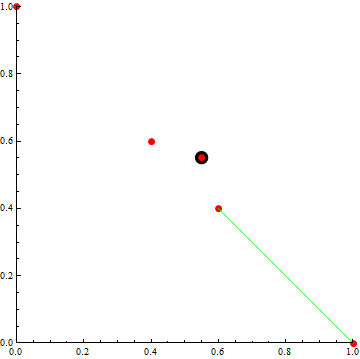 Any point on that line is better, from x's perspective, than the standard outcome (0.55,0.55) (she will get at least 0.6 in utility on the green line). So, if we accept Pareto-optimality and symmetry, then one of the players has to be able to profit by lying in certain situations.

Pareto-optimality is required: if you waive that condition, then some non-Pareto solutions such as "flip a coin, and the winner gets to decide the outcome" do not allow liars to prosper.