Superintelligence 13: Capability control methods
Summary
Another view
Notes
1. What do you do with a bad AI once it is under your control?
2. Cryptographic boxing
3. Philosophical Disquisitions
4. Some relevant fiction
5. Control through social integration
6. More miscellaneous writings on these topics
How to proceed
45 comments

Welcome. This week we discuss the thirteenth section in the reading guide: capability control methods. This corresponds to the start of chapter nine.

Brian Clegg reviews the book mostly favorably, but isn't convinced that controlling an AI via merely turning it off should be so hard:

I also think a couple of the fundamentals aren’t covered well enough, but pretty much assumed. One is that it would be impossible to contain and restrict such an AI. Although some effort is put into this, I’m not sure there is enough thought put into the basics of ways you can pull the plug manually – if necessary by shutting down the power station that provides the AI with electricity.

...We’ll reprogram the AIs if we are not satisfied with their performance...

...This is an engineering problem. So far as I can tell, AIs have not yet made a decision that its human creators have regretted. If they do (or when they do), then we change their algorithms. If AIs are making decisions that our society, our laws, our moral consensus, or the consumer market, does not approve of, we then should, and will, modify the principles that govern the AI, or create better ones that do make decisions we approve. Of course machines will make “mistakes,” even big mistakes – but so do humans. We keep correcting them. There will be tons of scrutiny on the actions of AI, so the world is watching. However, we don’t have universal consensus on what we find appropriate, so that is where most of the friction about them will come from. As we decide, our AI will decide...

This may be related to his view that AI is unlikely to modify itself (from further down the same page):

3. Reprogramming themselves, on their own, is the least likely of many scenarios.

The great fear pumped up by some, though, is that as AI gain our confidence in making decisions, they will somehow prevent us from altering their decisions. The fear is they lock us out. They go rogue. It is very difficult to imagine how this happens. It seems highly improbable that human engineers would program an AI so that it could not be altered in any way. That is possible, but so impractical. That hobble does not even serve a bad actor. The usual scary scenario is that an AI will reprogram itself on its own to be unalterable by outsiders. This is conjectured to be a selfish move on the AI’s part, but it is unclear how an unalterable program is an advantage to an AI. It would also be an incredible achievement for a gang of human engineers to create a system that could not be hacked. Still it may be possible at some distant time, but it is only one of many possibilities. An AI could just as likely decide on its own to let anyone change it, in open source mode. Or it could decide that it wanted to merge with human will power. Why not? In the only example we have of an introspective self-aware intelligence (hominids), we have found that evolution seems to have designed our minds to not be easily self-reprogrammable. Except for a few yogis, you can’t go in and change your core mental code easily. There seems to be an evolutionary disadvantage to being able to easily muck with your basic operating system, and it is possible that AIs may need the same self-protection. We don’t know. But the possibility they, on their own, decide to lock out their partners (and doctors) is just one of many possibilities, and not necessarily the most probable one.

1. What do you do with a bad AI once it is under your control?

Note that capability control doesn't necessarily solve much: boxing, stunting and tripwires seem to just stall a superintelligence rather than provide means to safely use one to its full capacity. This leaves the controlled AI to be overtaken by some other unconstrained AI as soon as someone else isn't so careful. In this way, capability control methods seem much like slowing down AI research: helpful in the short term while we find better solutions, but not in itself a solution to the problem.

However this might be too pessimistic. An AI whose capabilities are under control might either be almost as useful as an uncontrolled AI who shares your goals (if interacted with the right way), or at least be helpful in getting to a more stable situation.

Paul Christiano outlines a scheme for safely using an unfriendly AI to solve some kinds of problems. We have both blogged on general methods for getting useful work from adversarial agents, which is related.

Paul Christiano describes a way to stop an AI interacting with the environment using a cryptographic box.

Danaher again summarizes the chapter well. Read it if you want a different description of any of the ideas, or to refresh your memory. He also provides a table of the methods presented in this chapter. 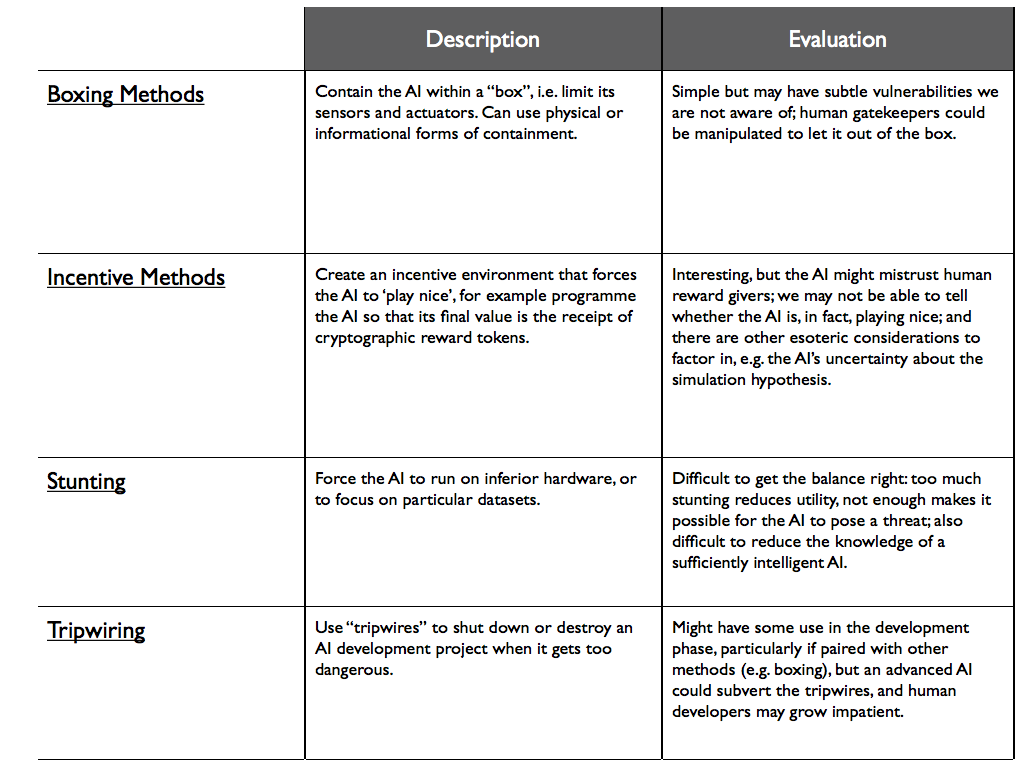 That Alien Message by Eliezer Yudkowsky

Robin Hanson argues that it matters more that a population of AIs are integrated into our social institutions, and that they keep the peace among themselves through the same institutions we keep the peace among ourselves, than whether they have the right values. He thinks this is why you trust your neighbors, not because you are confident that they have the same values as you. He has several followup posts.

6. More miscellaneous writings on these topics

LessWrong wiki on AI boxing. Armstrong et al on controlling and using an oracle AI. Roman Yampolskiy on 'leakproofing' the singularity. I have not necessarily read these.