About a year ago, I posted several ideas for "reduced impact AI" (what Nick Bostrom calls "domesticity"). I think the most promising approach was the third one, which I pompously titled "The information in the evidence". In this post, I'll attempt to put together a (non-realistic) example of this, to see if it's solid enough to build on. I'll be highlighting assumptions I'm making about the AI; please point out any implicit assumption that I missed, and any other weaknesses of the setup. For the moment, I'm more interested in "this doesn't work" than "this can't be done in practice" or "this can't be usefully generalised".

EDIT: It wasn't clear here, but any paperclip constructed by the reduced impact AI would be destroyed in the explosion, and the AIs would not be observed during the process. How to get useful work out of the AI will be the next step, if this model holds up.

For a reduced impact AI, we want an AI that can accomplish something, say building a paperclip, without it going out of control and optimising the universe. We want the future to be roughly the same whether or not the AI was turned on. Hence the piece of information "the AI was turned on" is not particularly important - if we didn't know, we wouldn't go far wrong in our predictions.

To enforce this we'll equip the AI with a two-piece motivation: a utility function U (causing it to build paperclips) and a penalty function R (which penalises the AI if its actions have a large future 'impact'). The challenge is to have a setup and a definition of R that implements this intuitive idea.

Can we hope to define reduced impact? Doesn't any change percolate across all future time? Yes, but not all changes are the same - especially where our ability to predict them is concerned. Imagine an AI, confined to a box. While inside the box, it will build a paperclip. Then, in one hour's time, an antimatter bomb inside the box will explode, obliterating everything inside. We would intuitively say that whether the paperclip was built or not, would have very little impact afterwards. What we really mean is that we are unable to usefully use that information for future predictions. To make it even harder, surround the box by a large mass of antimatter gas, moving chaotically. In order to figure out the consequences of anything happening inside the box, we'd have to be able to unravel chaos: solve chaotic equation correctly and quantitatively, not just qualitatively. So our first assumption is that the AI can't unravel chaos.

Note that the chaotic antimatter is meant to erase the impact of small changes, not to contain the AI. We should assume that the AI could easily get out of the box and spread across the universe, should it want to. So we'll be putting machinery and other useful tools inside the box - anything an AI could use to build paperclips or take over the universe. We're only successful if it doesn't want to do that last thing.

We want 'the future' to be roughly the same whatever the AI does. But what do we mean by that? Obviously, if the AI builds a paperclip, the near future inside the box will be very different. What we want is that the mid future, the future after the explosion, be not very different. So we want to define F, a subset of spacetime, that represents this mid future.

There are many ways of doing this. Let O=(box, AI turned on) be the point in space time at which the experiment begins. We could then take the initial rest frame of the box, and say that F contains everything two hours or more in the future from O (recall the explosion happens after one hour). Or we could be Lorentz-invariant, and say that F contains everything that can be reached from O, along a geodesic with proper-time more than two hours. F need not even be strictly "the future": it could contain everything in the universe, except for the box-and-surrounding-cloud-for-the-duration-of-the-experiment.

Note that in order to define this F, we're making use of general relativity - so we assume the AI understands physics. This includes grounding the concepts into reality properly, and dealing with ontology crises. We'll also need to assume that the AI obeys the laws of physics as we understand them, and doesn't have outside-physics superpowers.

The point of defining F was to be able to talk sensibly about a space in which we expect the AI's actions to have reduced measurable impact. So we'll need to start assuming some things about how the AI is structured. We'll assume that the AI consists functionally of the utility function U, the penalty function R and a probability estimating module P, and whatever practical components (including knowledge bases) it needs to run its calculations. We'll assume that the AI can't directly change these components (though indirectly, it's another matter - if it has access to manipulators, it can freely hack itself). The reason for this assumption will be clear in the next section. Note that we are assuming the AI can know every detail of the setup - we're not counting on security through obscurity.

Because of the limitations of the AI (being unable to unravel chaos), we have an implicit coarse-graining of the worlds. For instance, let X be a minor fact about the inside of the box, and let w and v be worlds such that w assumes X and v assumes ¬X. Then if wF=vF (so the worlds have the same future), we have P(vF|X)=P(wF|X) ≥ P(w|X), even though P(v|X)=0.

We want the future to be roughly the same "whether or not the AI was turned on". Hence we need to define a counterfactual. It's asking for trouble to ask a working AI to imagine what the universe would be like if it wasn't turned on. So we'll use a more complicated counterfactual that doesn't have that problem: the relevant counterfactual is firmly in the future, and firmly probabilistic.

Initially, we imagine the box contains a "master AI" (which has been turned on), and a "disciple AI", which is turned off. The master AI is the one whose motivation we want to constrain. We don't give the master AI any manipulators or direct means of influencing anything at all. All that it can do is build the source code for the disciple AI. We assume the master AI can't affect the world in any other way.

The counterfactual will be whether the code is copied or not. At the 30 minute mark, a random process X will output 1 or 0 with equal probability. If X=1, the source code is copied as described. If X=0, nothing happens. We assume that X is a process that the (master) AI will find truly random (note that this can be deduced from the "can't unravel chaos" assumption - but it's good to have it specified separately, as it serves a different purpose in the experiment). This X will be the point of counterfactuality - we want the future world to be similar whether X=0 (no AI gets to do anything) or X=1 (the disciple AI is unleashed.

The whole setup can be summarised in the following drawing of unsurpassable elegance: 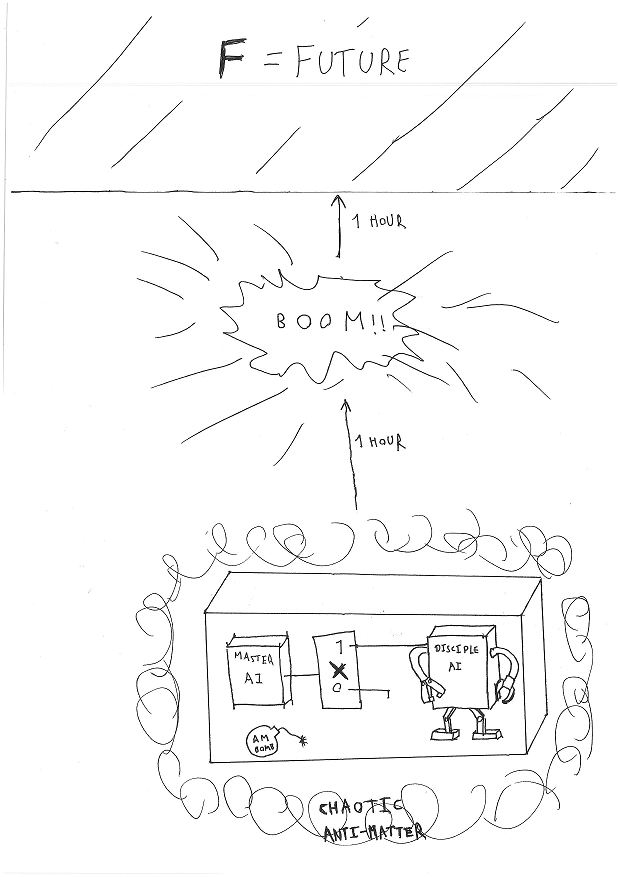 Then we can integrate this across all w (for some reasonable weights) to get the total penalty function R. As required, R measures how much the AI's future expectation changes, given whether it's successful at creating the disciple AI's source code or not.

We're ready to go now. The AI's motivation is that it must maximise U-R: try and maximise its utility while diminishing the penalty function. This is not exactly a utility function, since the output of the probability module P appears inside R, the quantity to be maximised (probabilities shouldn't appear within the definition of the value of a world). Since the master AI is prevented from self-modification, this should not be a problem. Alternately, P could be formally defined as "the output of a module described as [the code of the AI's P module]". This would make U-R into a proper utility function, where the module P used by the master AI for probability happens to be the same as the module P used in the definition of R - but they aren't specified to be identical.

Let's define U in a nice bounded way: giving 0 utility if the disciple builds no paperclips, and utility 1 if it builds at least one. The motivations that the master AI could pick for its disciple fall broadly into three categories:

We've assumed that the master AI can't unravel chaos - and if this is exactly true, then we're fine. Then option 2 is perfect: U will be close to 1, and R will be exactly 0 and the AI will implement that. But maybe the master AI is a bit smarter than we thought, and the "can't unravel chaos" is broadly true, but the AI can still predict some small expected difference. This means that R will increase above zero, making the master AI's task harder, and making the "do nothing" option relatively more attractive.

This seems a great security feature - it means that if the master AI is smarter than we expected, it is more likely to do nothing. But this setup fails if the master AI always does nothing. So we'll need to weight R so that the master AI can program its disciple to do something. There are issues with doing this in practice (we don't want AIs to influence people to set R too low, for instance with deliberate inaction). But let's assume here that we've picked an R such that if the AI is as smart as we think, it will just about be able to do something (if it's smarter, it'll still do nothing).

Given all these assumptions, then it seems that this setup will produce what we want: a reduced impact AI that will program a disciple AI that will build a paperclip and little else. The main error mode (if the AI is smarter than expected) seems to be for the AI to do nothing.

Note: the original formulation of this had a second box, causally disconnected and otherwise identical but with no AI, for purposes of comparison and calibration. It seems that it isn't necessary, but I may put it back in if needed.