We Live in an Era of Unprecedented World Peace

[Edit: This data seems to underestimate the violent death tolls in state societies. I think the general thesis is still valid but the data I used in this article should be taken very skeptically.]

Beside not dying of infectious disease my favorite thing about living in the 21st century is the fact I live in an era of unprecedented world peace. For most of human history, people didn't live in civilizations. For 90% of Homo sapiens existence, everyone lived as hunter-gatherers, pastoralists, or just small-scale farmers. Primitive societies are violent. 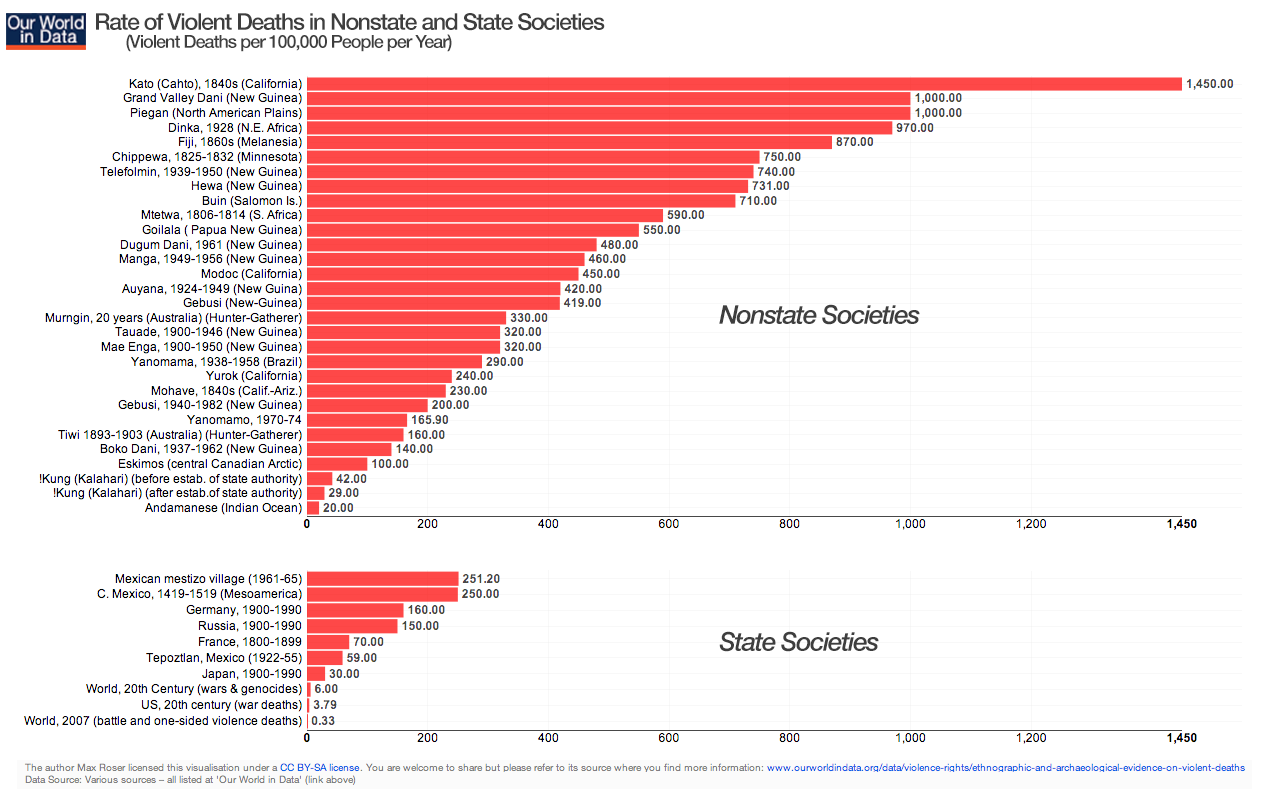 A few of primitive societies stand out as having relatively less violence, particularly the Eskimos and the !Kung. The Eskimos live in the Arctic tundra. The !Kung live in the Kalahari desert. They have so little violence because there is so little to fight over.

Most people live in places with high population densities. Places with lots of food can support larger populations. I suspect that, prior to civilization, most people lived in the most plentiful regions like modern New Guinea. In The World Until Yesterday, Jared Diamond writes about how in New Guinea, entire tribes would commit regular genocide against each other.

The !Kung and the Eskimos were paragons of nonviolence by the standards of primitive societies. Yet the 20th century (which included the Russo-Japanese War, World War I, World War II, the Armenian Genocide, the Chinese Civil War, the Korean War, the Vietnam War, the Soviet-Afghan War and many other conflicts) had a fraction of the per capita violent deaths of the !Kung and the Eskimos. 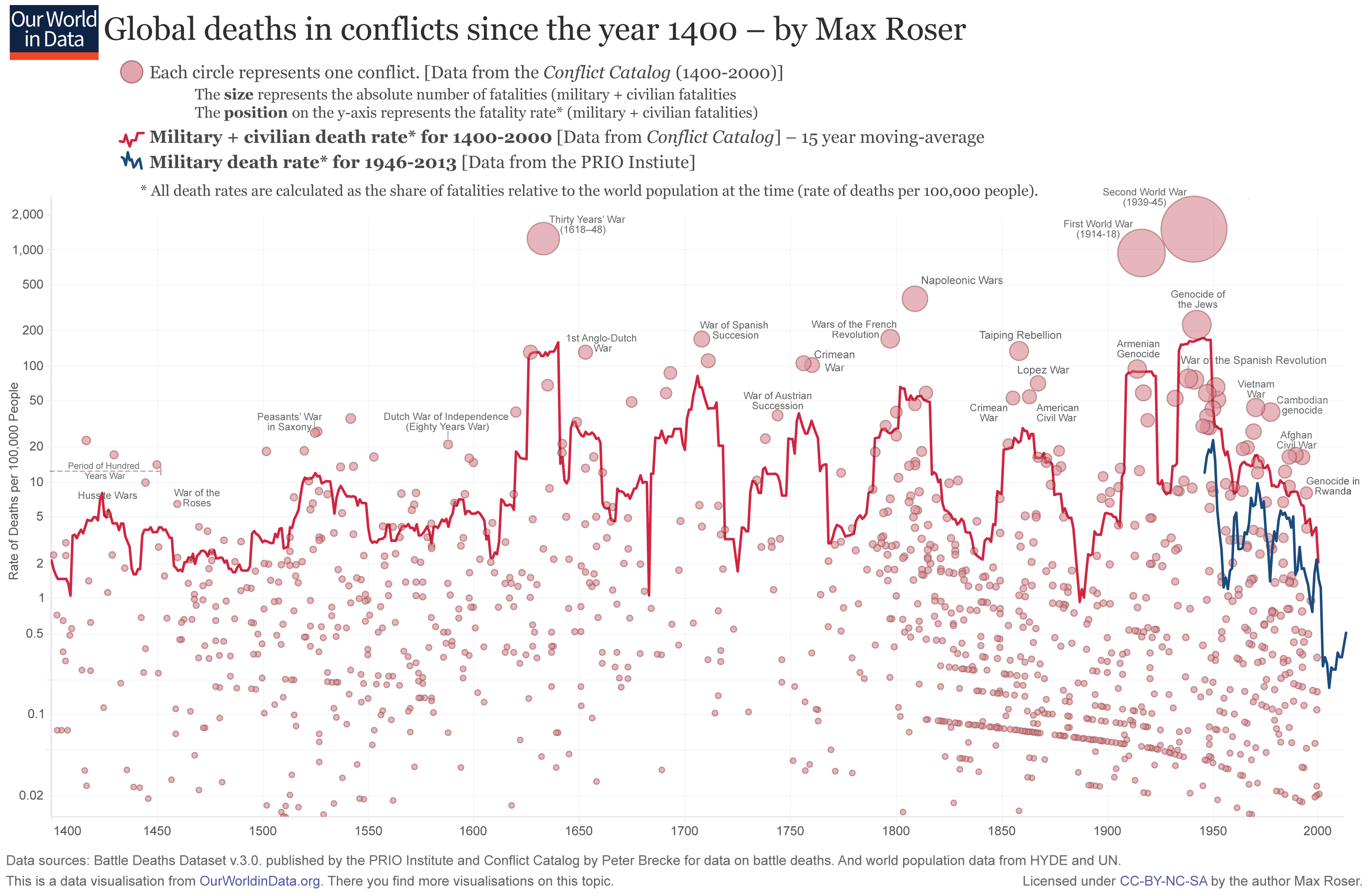 I was surprised to discover that conflict death rate went up by an order of magnitude between the Colombian Exchange and the modern era. (The chart uses a log scale.) But even at its height, civilization's per capita violent death rate was a fraction of the most peaceful primitive societies we have numbers for.

World War Two was the biggest conflict in human history. It ended in 1945. Let's pessimistically cherry-pick our data by examining only 1947 and later. The violent death rate still goes down over time. 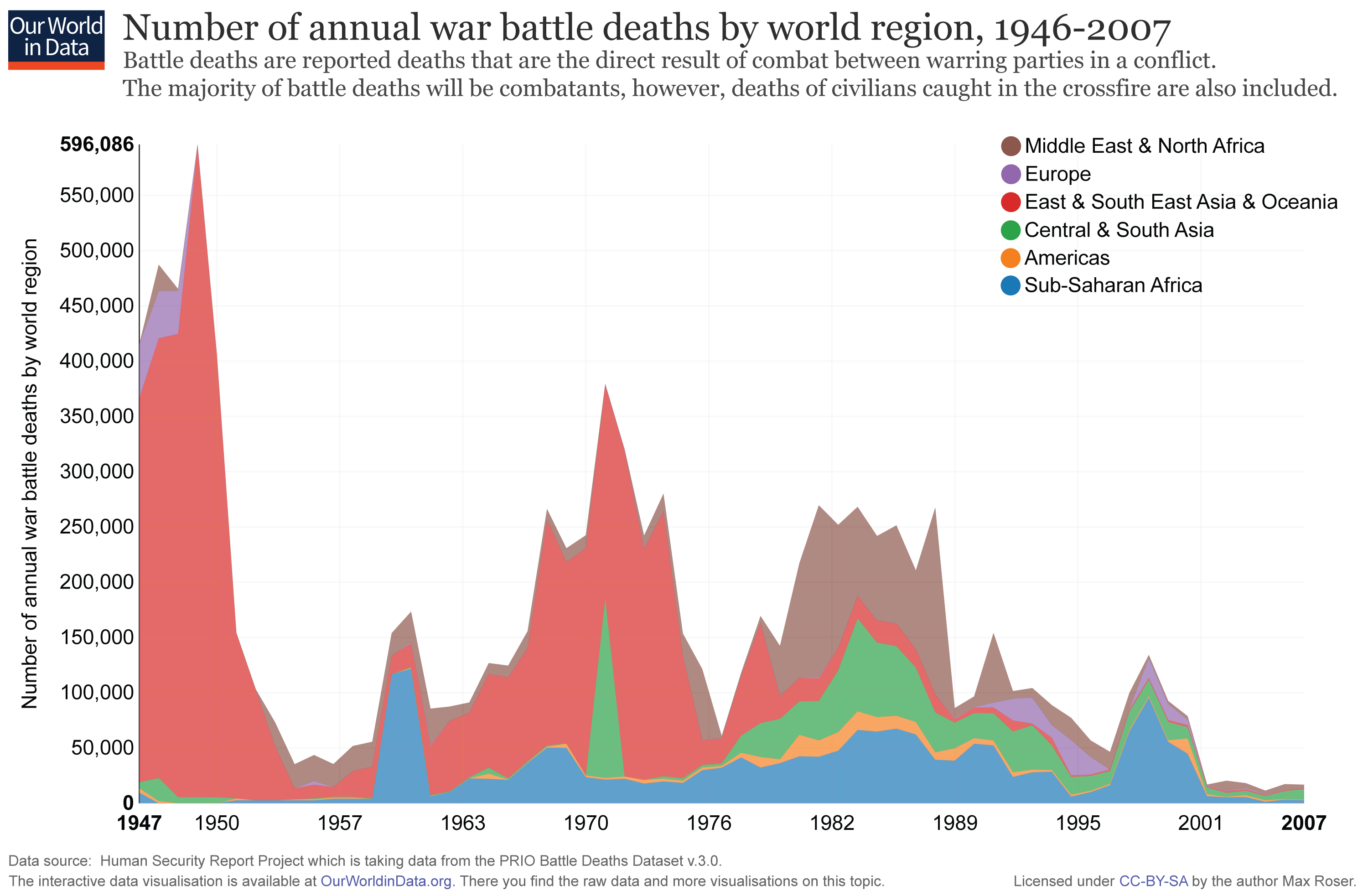 I'm a bit skeptical of that global deaths in conflict dataset. Eyeballing it it looks like almost all of the labelled data points are from Europe. What about China? Africa? India? the Americas? I worry that there may be missing data / lack of records from those other parts of the world, or at least that it's not appearing in this dataset.

Now that you mention it, this number does seem to undershoot the death count.

Me too. Thank you for pointing this out. If anyone has better numbers I'd be happy to go over them.

How much of our societies' low violent death rate is due to birth control? Our modern societies managed the impossible: actually curb birthrates against eons of genetic programming.

Also, our societies are less violent, but they compete for resources, brain power and information control orders of magnitude more than any time before in history. This might be a sign of shifting from one type of war to another.

Of course this analysis involves ignoring other sentient beings.  If we take their lives into account, we probably live in a time of unprecedented genocide.

The term “genocide” is not appropriate for describing the killing of any number of animals.

Agreed, it's more appropriate for making an entire species of animal go extinct though.

What dictionary are you using?

"Xenocide" is an acceptable alternative.

Right, but as far as I can tell the method by which we've been positive has been genocide?

Yes, kind of (depends on how genocide exactly is defined).

I would speculate most of the impact is through insects not being born because their predecessors starving at a higher-than-normal rate because of the reduction of ecosystems, and not by being directly killed (e.g. crushed or killed by insecticides).

The posts above rest on the assumption of total hedonic utilitarianism, with no moral uncertainty being considered, and on several other empirical assumptions.

Happy to ignore them.

The Eskimos live in the Arctic tundra. The !Kung live in the Kalahari desert. They have so little violence because there is so little to fight over.

Debatable. Other primitive societies that lived in deserted areas where extremely violent.

The original article doesn't really addresses the differences of state vs non-state societies, yet this binary characterization dominates the entire reading. Some interesting examples seems to have been conviniently left out. The entire article is mostly derived from a single essay (sources look good, though).

Still, I would generally agree that violence has decreased with the advent of modernity.