CuriosityHealth / Medicine / DiseaseWorld Modeling
Curated
What it's like to dissect a cadaver
Why
Takeaways
What & how & why
Many random observations
Brain
What is it like to experience something?
17 comments

I never thought I was a bio person. But then I overheard Viv talking about MAOIs at a party. I asked her:

Viv had the most important trait of a teacher: patience. I asked the most naive questions and they answered them. They walked with me, all the way down to the very beginning, rebuilding my understanding. It was amazing. I wanted to know more. Roadblock: finding lifeforms to study.

I wondered if non-medical students could watch dissections. You can’t get more information about an object than by directly interacting with it. The concrete world contains the abstract one. I even asked my doctor at a physical if she knew of any, and she said to look at community colleges.

After some searching, I found this: Bio 848NV. Forget viewing the dissection, you’re doing the dissection. 5 hour dissection for $60, free if you just watch. The only bureaucratic hangup is that you must pay by check.

This is why I love the Bay Area: there’s stuff like this and you can just do it. yes it’s weird no they can’t stop you. The boundary between scientist and serial killer is paper thin sometimes.

I tell my friend Leah and she says “This is the most appealing activity that I’ve ever seen you do”. Dunno whom that says more about.

We arrive and there are 5 people around 3 cadavers. We get aprons and lab coats and start syringing what’s mostly Downy fabric softener with a syringe. It prevents decay and smells sickly sweet.

Corpses can last a long time. One of the corpses had been dead for 5 years.

There’s a crazy amount of connective tissue, and it makes a creepy wireframe surrounding your skeleton. Even the space between the folds of the brain has it.

If you exercise, we’ll know. Their insides just look different. “It’s who you are inside that matters” is a much creepier sentence now.

Veins, arteries, and nerves all travel together, wound around each other by a bunch of connective tissue. Mnemonic: VAN.

Cancer can turn your guts and lungs green, and it’s this horrible bright moldy green. Metastasized tissue is hard but ultimately crumbly like overcooked chicken liver. The stomach and intestines have textures reminiscent of damp cardboard, but they’re dry to the touch.

I finally saw a lymph node. The body has a lot of drainage into the lymphatic system.

There’s a bunch of tiny nerves and you can’t feasibly preserve all.

The etymology of the word patience is “capacity for suffering”. This is apt. You can’t rush the process, and believe me, it is a process. Exposing the VANs requires reflecting away the skin, and this takes a long time and much more physical effort than you’d think. You’re basically scraping it off, and the best tool overall is your hands. Skin in particular is much tougher than it looks, and I ended up locking a pair of forceps against a shoulder and just leaning back to pull it taut.

Speaking of the shoulder, I spent 2 hours working up through one. There are a lot of fiddly bits. I knew, but didn’t understand, that your nerves go all the way up into the brain, and that you can just trace a nerve to its source. This may require destroying the rest of the cadaver, and people have made careers following bits backward.

Hands and feet. Looking at their bones made evolution’s suboptimality obvious. No wonder our feet have so many problems: they were once hands. Hands have 27 bones each, feet 26. Over time, the bones at the top squished together, the palm became the heel, and the fingers shortened into toes. The toenails are vestigial. This is the grossest part IMO, since the extremities look so dainty compared to the rest of it, and your job is basically to flay it/them. This is the one spot where blood can still be found, even after drainage.

Corpses are ridiculously stiff. I couldn’t turn an arm over without risking snapping the wrist. Even moving a finger is hard.

Interviews with cannibals claim that humans taste like pork. I can’t speak to the taste, but it looks similar. Speaking of food, knowing how to cut a chicken transfers almost perfectly. Odd feeling to realize that.

Women have wider hips, and I wonder if that leads to increased lateral flexibility. Stacking plaster hip molds so they’ll fit into a cupboard is very annoying.

We did a face lift, and it was extra uncanny, because you actually lift their face and go underneath it to the bones. Also, your face muscles are the only ones that are directly attached to your skin. This hardcoding interests me.

Fat is grease, so it’s greasy. This will become visceral (and you will never perceive the word “visceral” the same way again) real fast, since it’s everywhere, in little flecks. Marbling isn’t just for steak. It’s sort of yellow and gets on everything.

Cutting into the skin and tissue is interesting. The skin goes way deeper than I thought, and you can stand a scissor point in it.

I finally got to hold a brain! 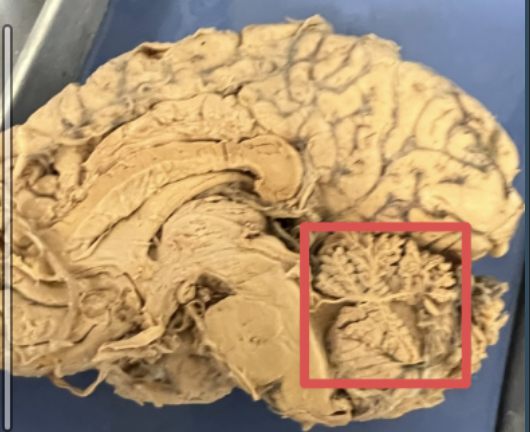 The cerebellum is the fern-y fractal on the bottom right. In general, it has a fractal dimension of ~2.5. 3 in 4 of your neurons are in there, and it uses just 1/10 the space. But you can live without one! It’s a low latency broad (rather than deep) neural network. It’s most famous for motor skills, but there is more. 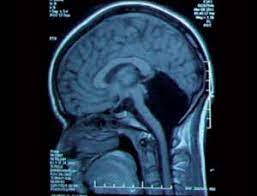 People with cerebellar agenesis (without a cerebellum, like in the picture above) have trouble developing deep, complex relationships like most of us form with our spouses, best friends, and partners. They lack emotional nuance and complexity, and so are unable to form these bonds. This shows the role the cerebellum must play in emotional coordination.

So many neurons in a fractal make me wonder if artificial neural networks do this too. Fractal dimension continuously interpolates the regular concept of dimension, so a 2.5-dimensional space is genuinely ~evenly between a 2D surface and a 3D solid. Perhaps evolution is trying to get the best of both using fractals and folds? Interpretability idea: look at the singularity spectrum of random projections of the parameter space of a model during training.

Most of the soma (main bodies) of your neurons are on a <5mm film on the surface gray matter, and the inside of the brain is the connections between them. If you shaved a brain, the connections would be mostly fine but many neurons wouldn’t be.

There’s a cool paper by Kolmogorov and Barzdin called *On the Realization of Networks in Three-Dimensional Space, motivated by this fact.

For graphs with the expander property, the Kolmogorov-Barzdin realization from Theorem 3.2 is the smallest possible realization of the graph in \(\mathbb{R}^3\).

A weirdly large amount of my friends wanted to join, including many I thought would be horrified. 8 (and counting) have taken the initiative to ask. 6 showed up, so far. I’ve even taken a date there, and she enjoyed it! Turns out there are more than a few people who do it for pure curiosity (besides the ones I invite). Next time, the goal is to remove the brain without damaging the optic nerve. Very time-consuming, but I’m not in a rush.

Thoughts I didn't expect to think: "reading Less Wrong made me kinda want to dissect a cadaver".

This had entirely the opposite effect on me, but was an interesting read nonetheless.

Loving your enthusiasm (do not read any condescension into that statement). I wish it was shared by a majority of medical students. .

Speaking as a surgeon I would like to stress one nuance; you are operating on a preserved cadaver. The tissues of a living person are indescribably more delicate and beautiful.

Thanks =). Any way to access fresh cadavers? I doubt I’ll be allowed to do surgery anytime soon.

Not that I'm aware of.

Curated. I've got to hand it to this post for raw unadulterated expression of pure Ravenclaw curiosity at how the world (and we ourselves) work. It is morbid and it's perhaps fortunate the images are broken, but I'm just enjoying how much the author is reveling in the knowledge and experience here.

I like the generalized lesson here of GO LOOK AT THE WORLD, it's right there.

I don't know that I have the stomach to do this myself, but glad people are!

I loved this, but maybe should come with a cw.

I would think the title is itself a content warning.

I guess someone might think this post is or could be far more abstract and less detailed about the visceral realities than it is (or maybe even just using the topic as a metaphor at most).

What kind of specific content warning do you think would be appropriate? Maybe "Describes the dissection of human bodies in vivid concrete terms."?

I thought the title was a joke or a metaphor

I thought there was a great shortage of cadavers. How did they manage to get them for a non-medical school, indeed for use by non-students? Also, I am quite impressed that any course, particularly in the Bay Area, is $60 or free.

It sounds like a "good" cadaver is young, not too obese or too evidently diseased. And apparently although it's illegal to buy and sell organs for transplant (one of my obsessions, AMA), it's legal to sell whole cadavers. But considering that doctors in particular (FAR in excess of the public) consider any form of financial incentive associated with body parts "repugnant," I wonder if medical schools may not choose to purchase cadavers? If so, this would then mean that there's a more adequate supply of sold or "low quality" cadavers, but a shortage of donated "high-quality" cadavers, and so abundance can coexist with shortage depending on how one is willing to source them. I have to stress that I'm not confident this is true -- it's just something to look into if you're curious.

Do you happen to know the specifics of how these cadavers came to be available? There's recently been some investigative reporting on this topic. The broad gist is that most people who are "donating their bodies to science" probably don't get that companies will take those donated bodies and sell them for what are essentially tourist attractions like the one that you're participating in.

Ah, it's much too early in the day for med school PTSD.

I always hated anatomy classes, nor was I particularly fond of dissections, finding a relatively fresh corpse was a luxury, and most of the time they'd been embalmed in formaldehyde so long that they were one bandage wrapping away from mummy status.

At that point, finer internal structures become akin to a greyish mess of the worst cable-management imaginable, and it's an absolute nightmare to distinguish between arteries, veins or nerves, they're all thin grey wires.

Even in live patients, it's often not trivial, but surgeons do get much better at it over time.

Now, what always pissed me off was the love of Unnecessary Latin.

But nothing triggered me more than the farcical naming of certain anatomical structures, because of course there's an innominate artery and innominate bone, and why shouldn't we name something as "nameless" in Latin?

Man, I'm going into psychiatry just so I never have to memorize the brachial plexus again haha.

I can't see the images on firefox, opera or edge. Cool post though.

Note: small thank you for the link https://www.etymonline.com/word/patience; I've never seen this site but I will probably have a lot of fun with it.

Have you explored the Oxford English Dictionary - the bees knees of dictionaries and sources of etymology?

Here are the OED entries for "patience" : https://i.imgur.com/S5tGj7i.png

A goldmine if you appreciate the origin of language.