On the importance of taking limits: Infinite Spheres of Utility

On the importance of taking limits: Infinite Spheres of Utility
Deciding how to decide
The Finite Problem
The Infinite Limit
Expected Personal Utility
The Answer
58 comments

I had a discussion recently with some Less Wrongers about a decision problem involving infinities, which appears to have a paradoxical solution. We have been warned by Jaynes and others to be careful about taking the proper limits when infinities are involved in a problem, and I thought this would be a good example to show that we can get answers that make sense out of problems that seem not to.

The problem is the "Infinite Spheres of Utility." To quote a description from Philosophy et cetera,

Imagine a universe containing infinitely many immortal people, partitioned into two "spheres". In one sphere [sphere A], all the inhabitants live a blissful existence, whereas the members of the other sphere [sphere B] suffer unbearable agony. Now compare the following two variations:

At first consideration, the problem appears to cause a paradox:

Which scenario is better? The answer, paradoxically, appears to be "both".

Given these reasonable but hard-to-reconcile viewpoints, how do we make a decision?

Deciding how to decide

We first need to decide which kind of decision analysis we want to use to choose a starting sphere. For example, we might simply have an arbitrary preference for putting everyone in the bad sphere. Paradox over. Even if we want to use a form of utilitarianism, we have more than one type to choose from. One of the simplest and most intuitive is additive utilitarianism, in which we define a utility for each person, add them all together, and make the choice with the larger total utility. We can think of the paradox above as resulting from our insistence that the solution conform to this kind of decision analysis: it appears that there should be more than one conflicting solution. In fact, we will see that there are three mutually exclusive solutions conforming to additive utilitarianism, and we can get to any one of them by solving the finite problem and choosing how to take the infinite limit.

We will begin by creating an analogous finite problem using additive utilitarianism.

, respectively, which carry units of [utility/(day*person)]. We might, for example, choose

. The total utility is the sum of

over all people and all days, or

, respectively, and I've implicitly summed over the number of people for brevity. We have assumed a linear utility function that values every person’s utility equally on every day, but we could easily generalize to other functional forms. Define

as the people-transfer rate, which the problem dictates to be

For choice 1, we begin with

of them per day so

with these variables only defined for , beyond which everyone would be dead. Note that even though

is 1, we'll end up with a unit error if we don't carry it around. If we go with choice 2 instead, these variables are switched, so

According to the problem statement, the transfer rate is constant, but we could again easily generalize to any transfer function if we wanted to (even non-monotonic ones, or ones that depend on the number of people in either sphere). Call the total utilities for each scheme

. From here on out, I will replace sums with integrals, because the graphs will look better and the math takes up less space. We take on a small error in the process, but it won’t affect the conclusion.

Then the total utilities are

for choice 2, so that the differential utility is

First, let's confirm that this result makes sense for finite

. Figure 1 shows what happens as we increase the number of people in the problem, but keep their life spans fixed. The differential utility forms a line, with the first part of the line below the horizontal axis. For a small number of people, it’s better to start everyone in sphere

, since everyone will be quickly transferred to

. But for a large number of people, it’s better to let them live out most of their lives on average in sphere

before getting transferred to sphere

approaches infinity, choice 1 is clearly better, since we have positive . 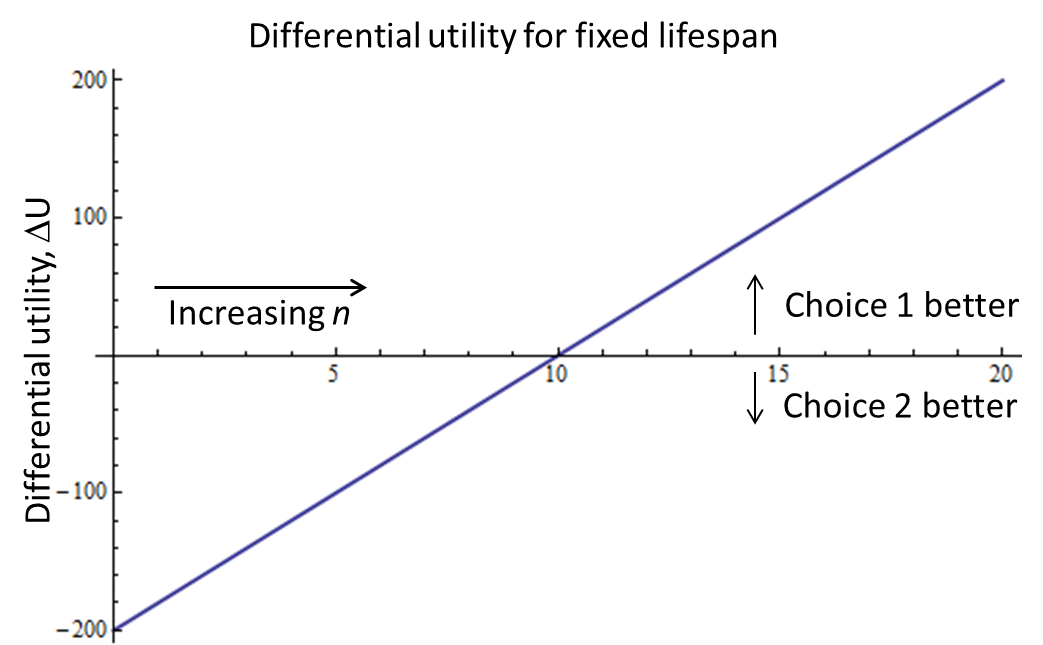 In contrast, Figure 2 shows what happens as a fixed number of people become long-lived. This time, we get a parabola. If everyone dies quickly, it’s better to start in sphere

, since many of them will die before they get transferred. If they live a long time, it’s better to start in sphere

, and then live out most of their lives after being transferred to sphere

approaches infinity, choice 2 is clearly better, since we want people living out their immortality in a good universe, which corresponds to being negative. 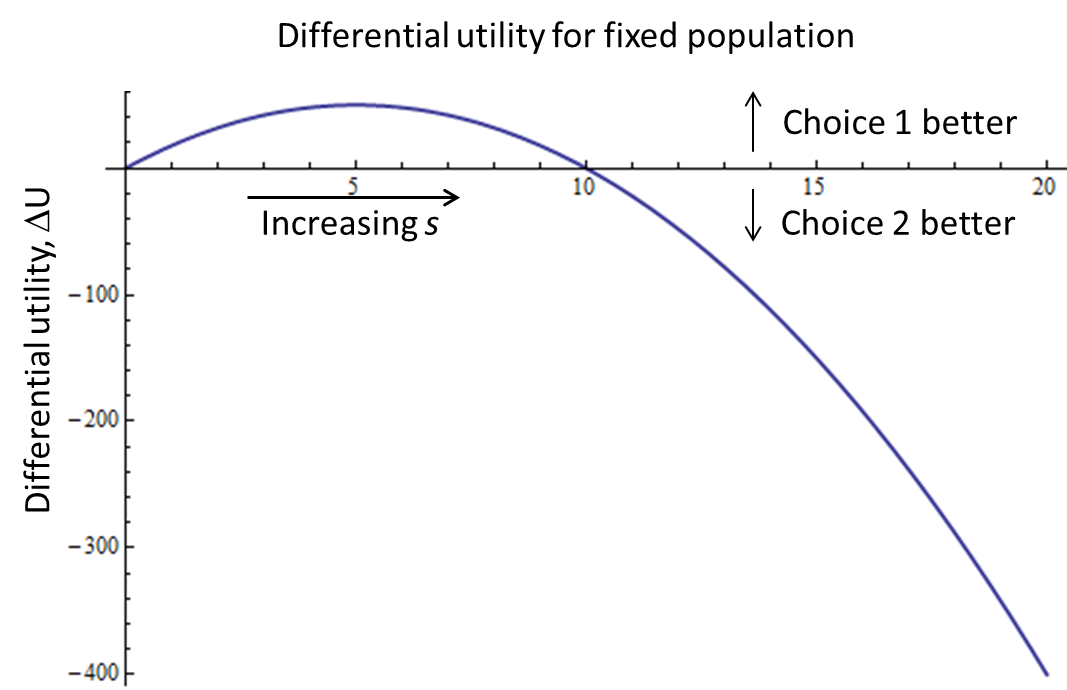 What happens if both

go to infinity, as stated in the problem? If we just plug into our equation, the answer is undefined, and that is the substance of the paradox. But of course, mathematics lets us carefully take limits of functions of multiple variables. Figure 3 is a density plot of as a function of both

. The value of is mapped on to color. When we refer to a system with “an infinite number of immortal people,” we’re talking about a point far away from the origin, where both

are positive and infinite. But from the density plot, it’s clear that we could be talking about many different points with different values, and we have to specify which direction we go to get there. For example, if we follow the red dotted line out from the origin, we will find that choice 1 gets better and better the more we increase

. If we follow the blue dotted line, choice 2 is better for large

. Finally, if we follow the green dotted line out to infinity, we find that for all

, meaning that our choices are equally good (or bad). 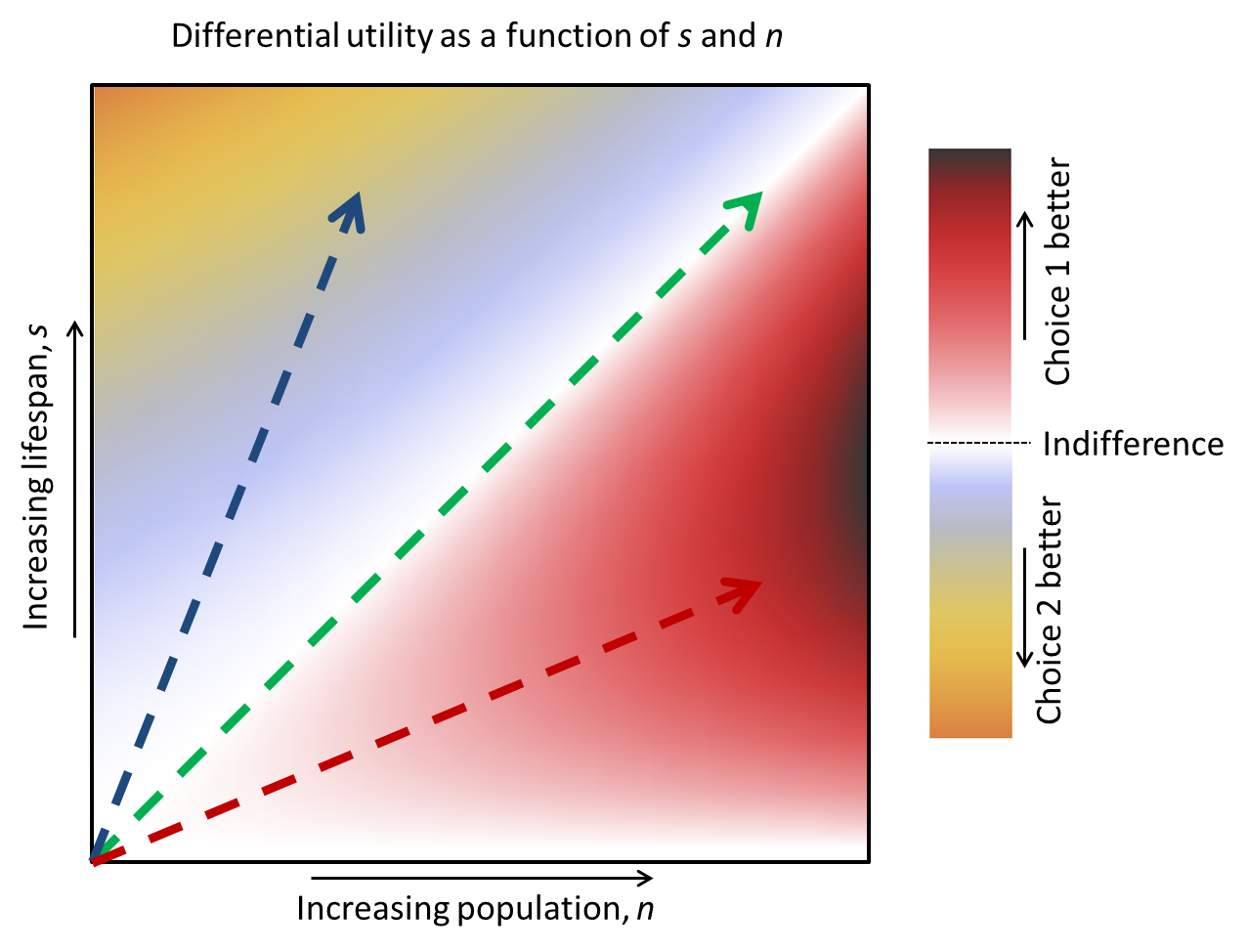 Figure 3: Utility vs. population and life span. The best choice depends on what path we follow to take the limit.

Practically, these lines represent situations in which we choose a finite number of people and a finite life span, and then monitor what happens to as we increase them both at a constant (but not necessarily equal) rate. We find that the answer depends on the difference in rates. To formalize this result, we can set in the equation, where

has units of [people/day], and is allowed to be fractional. That way, every time we double

, and we move towards infinity that way. Put another way, we constrain ourselves to a linear relationship between

(we could take a non-linear path out to infinity if we cared to). We then have

The limit of this function as is

if , which covers all of the possible linear paths to infinite population and infinite lifespan.

Another interesting question to ask is "If I were one of the people in the problem, what would I expect my differential utility to be?" We can answer this question using the same method as above. I define my utility per day in each sphere as

in units of [utility/day]. The expected number of days that I will be in the starting sphere for a finite population is

, and the number of days in the second sphere for a finite population and life span is . My expected utility is therefore given by

for choice 2. The differential utility is the difference between these, or

If we just plug in infinities, the answer is undefined. But if we use the same method as above, and define , then we can write

and we have well defined limits for all slopes . If I choose

, I find that my lifespan grows faster than the population grows, and I'm better off starting in the bad sphere, expecting to be transfered before half my life is over. If I choose

, the population grows too quickly, and I would prefer to start in the good sphere, since on average I'll die before I live more than half my life in the bad sphere. And as before, if

, I'm indifferent to the two plans, since on average I will live half my life in each sphere either way.

If we want to make a decision based on additive utility, the infinite problem is ill posed; it has no unique solution unless we take on additional assumptions. In particular, we introduced an additional parameter

, making clear three well defined solutions that span the space of possible solutions. In doing so, we solved a similar well posed problem, but not the original one.

So why bother, if we didn't solve the problem? It's worth working through the math because tt gave us an intuition for how the system works, including a quantitative understanding of crossing points, intercepts, and curvatures of the utility curves. While the problem statement corresponds to an impossible situation, the finite problem is quite possible, and taking linear limits could very well correspond to a real physical process. If we notice a paradox and then stop thinking, we lose an opportunity to gain a better understanding of the decision process.

We could also consider using a different paradigm of decision theory that might deal with infinite quantities better. With that said, I think that additive utilitarianism represents well the intuitive paradox that presents each choice as better than the other. Our graphs with one variable fixed showed that these are both intuitively valid viewpoints when taken alone, and their reconciliation is the challenging part.

If you're interested in similar problems, the St. Petersburg Paradox also involves diverging utillities, and it has has been "dispelled" here.

Author's notes: [last edit Oct.15, 2013] The subject of unbounded utilities is not new here at Less Wrong. Stuart_Armstrong has a well written analysis of the Heaven and Hell problem, among others. PhilGoetz has a useful note on infinities. And on a related topic, infinite set atheism abounds. I have been unable to find on LW examples of careful mathematical treatments of apparent paradoxes that result from misuse of infinites in utilitarian calculations, and I hope this article serves as a concrete example of how easy it is to defeat (some) such problems. If there are other examples at LW, please post them in the comments: I’d love to read them. It is interesting to note that Pascal's Wager, a famous related problem, is rather more difficult to solve. It involves not only infinities, but also a hypothesis space whose cardinality and particular members are not obvious.

Thanks to Mestroyer for bringing this problem to my attention, Manfred for helping me work through it, and VincentYu for pointing out the issues surrounding additive utilitarianism as a decision paradigm.