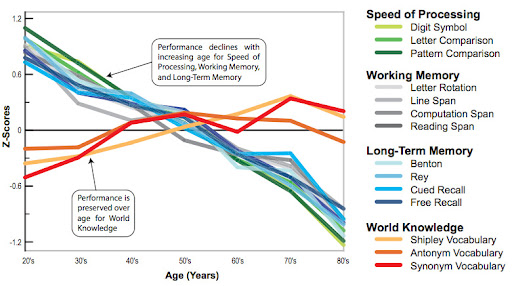 Yet, on the other hand, I've noticed that the most intelligent+aware posts almost always come from older people (there are exceptions, of course). Of course, intelligent posts depend more on crystallized intelligence rather than on fluid intelligence, and crystallized intelligence only grows with age (this is *especially* true for LessWrong users, since they are far more mentally engaged (in mid-life) than the groups that are probably tested on these metrics. But yet, it still takes a significant amount of mental effort to actually write intellectual posts, so I'm pretty sure that there's still some dependence on fluid intelligence.

In any case, I'd like to propose this question: Have you found it harder or easier to write thoughtful+intelligent posts as you've grown older? And how have changes in your brain and in knowledge affected the thoughtfulness of these posts. What do you think is your biggest constraint in making these posts? While I'm still very young compared to most people here, I've still noticed that the number of examples I can think of is the primary constraint to the amount I can write, and so I can expect myself to write better with time (since I'll learn more examples+have better ways of finding them), assuming no decline in fluid IQ.

Additionally, do old authors write any less well than younger authors? Especially authors who are very old? Jacques Barzun, in particular, wrote his last book at age 99. But it seems that most people have stopped producing by that age. It is said that Hans Bethe was the only nonagenarian physicist who produced a top-calibre publication in his 90s, for example. Of course, many of these effects are average, and beating the average is pretty easy if we're motivated enough to do it (simply because many others aren't motivated, and also because intellectual stimulation helps stave off brain shrinkage). But even in the end, beating the average may not be enough to prevent decline.

There's some more interesting literature on this in Dean Simonton's books (Psychology of Science in particular). Basically, they show that scientific productivity increase with age, but only up to a point, and then they start to decline. Some of these effects may be related to decreased motivation or decreased time, but it's also possible that some of them are related to decreased fluid intelligence (especially given that the declines come earlier for physical scientists than for social scientists)