With the expensive part of the Hallowthankmas season now approaching, a question must be looming large in our readers’ minds:

“Dear Overcoming Bias, are there biases I can exploit to be seen as generous without actually spending lots of money?”

I’m glad to report the answer is yes! According to Hsee—in a paper entitled “Less is Better”—if you buy someone a $45 scarf, you are more likely to be seen as generous than if you buy them a $55 coat.1

This is a special case of a more general phenomenon. In an earlier experiment, Hsee asked subjects how much they would be willing to pay for a second-hand music dictionary:2

The gotcha was that some subjects saw both dictionaries side-by-side, while other subjects only saw one dictionary . . .

Of course, the number of entries in a dictionary is more important than whether it has a torn cover, at least if you ever plan on using it for anything. But if you’re only presented with a single dictionary, and it has 20,000 entries, the number 20,000 doesn’t mean very much. Is it a little? A lot? Who knows? It’s non-evaluable. The torn cover, on the other hand—that stands out. That has a definite affective valence: namely, bad.

From Slovic et al.: Which would you prefer?3

While the average prices (equivalence values) placed on these options were $1.25 and $2.11 respectively, their mean attractiveness ratings were 13.2 and 7.5. Both the prices and the attractiveness rating were elicited in a context where subjects were told that two gambles would be randomly selected from those rated, and they would play the gamble with the higher price or higher attractiveness rating. (Subjects had a motive to rate gambles as more attractive, or price them higher, that they would actually prefer to play.)

You can make a gamble more attractive by adding a strict loss! Isn’t psychology fun? This is why no one who truly appreciates the wondrous intricacy of human intelligence wants to design a human-like AI.

Of course, it only works if the subjects don’t see the two gambles side-by-side. 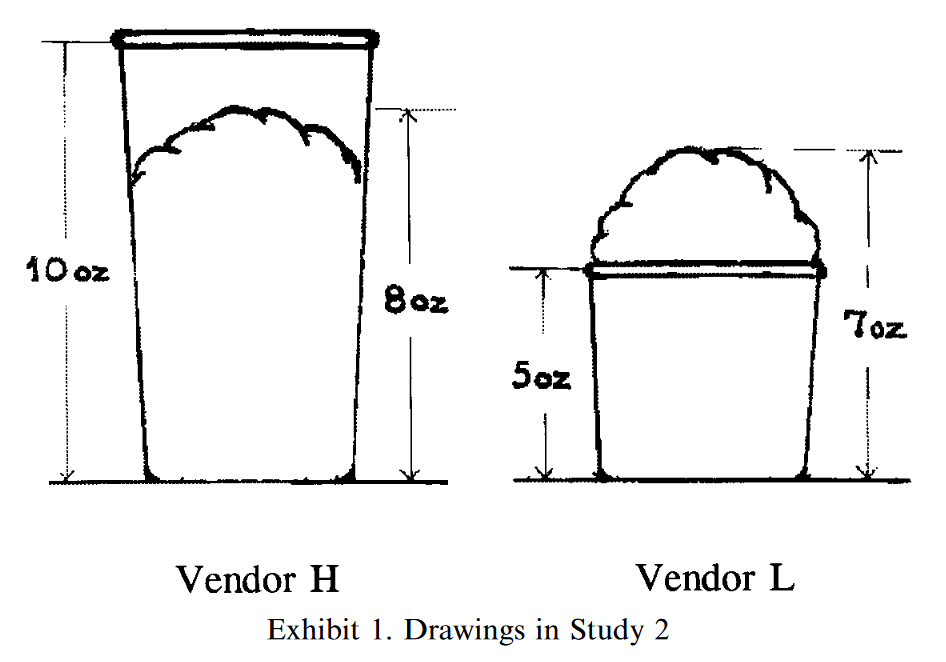 Similarly, which of the two ice creams in Figure 1 do you think subjects in Hsee’s 1998 study preferred?

What does this suggest for your holiday shopping? That if you spend $400 on a 16GB iPod Touch, your recipient sees the most expensive MP3 player. If you spend $400 on a Nintendo Wii, your recipient sees the least expensive game machine. Which is better value for the money? Ah, but that question only makes sense if you see the two side-by-side. You’ll think about them side-by-side while you’re shopping, but the recipient will only see what they get.

If you have a fixed amount of money to spend—and your goal is to display your friendship, rather than to actually help the recipient—you’ll be better off deliberately not shopping for value. Decide how much money you want to spend on impressing the recipient, then find the most worthless object which costs that amount. The cheaper the class of objects, the more expensive a particular object will appear, given that you spend a fixed amount. Which is more memorable, a $25 shirt or a $25 candle?

Gives a whole new meaning to the Japanese custom of buying $50 melons, doesn’t it? You look at that and shake your head and say “What is it with the Japanese?” And yet they get to be perceived as incredibly generous, spendthrift even, while spending only $50. You could spend $200 on a fancy dinner and not appear as wealthy as you can by spending $50 on a melon. If only there was a custom of gifting $25 toothpicks or $10 dust specks; they could get away with spending even less.

PS: If you actually use this trick, I want to know what you bought.